Durmand Priory, established in 1105 AE, is a monastery and place of knowledge in the Shiverpeak Mountains. It contains many volumes of information rescued from Lion's Arch during the flood by the Order of Whispers. It is named after Durmand, a master historian who established the truth about The Rise of the White Mantle, The Tengu Accords, The Battle of Jahai, and The Flight North, among other things.

The residents of the monastery are fighter-scholars that come from multiple races and fight to protect their "sacred charge". Their order, Durmand Priory, is named for the monastery.

Heart of the Priory 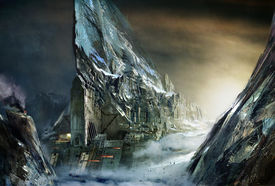 Priory Scholar: That noisy norn is back. Would someone shut him up?