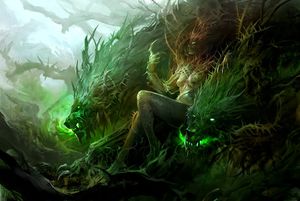 A true sylvari should have two hearts: one soft and pliable as hot wax, and the other as hard and impenetrable as an icy diamond. The first, he should show to his companions, the second, to his enemy. Woe to the one for whom the two are the same.

The Nightmare Court is a sylvari-only organisation whose members reject the teachings of Ventari[1]. Opposing the tenets of Ventari's Tablet, the Courtiers embrace the Nightmare encountered within the Dream of Dreams, giving life to it with acts of evil in an attempt to understand it and feed yet more horror to the Dream. The primary goal of the Nightmare Court is to corrupt the Pale Tree herself, bringing her around to their twisted ideals so that the sylvari may be freed from the shackles of Ventari's Tablet, and replace this Centaur-Human philosophy that has perverted the true nature of the Pale Tree and the sylvari by one which is uniquely sylvari.

The Nightmare Court do not consider themselves "perverse" or "evil". In their eyes, they are merely freeing the sylvari from a tainted outside influence, and consider it to be their noble purpose to bring others of their race away from that forced behavior and into darkness.

The sylvari in the Nightmare Court do not unanimously share the same mentality. Some courtiers preach their way is about balancing the Dream and the Nightmare, and only convert those willing to join; others seek for the Nightmare to overcome the Dream and will forcefully convert others to their cause. In the end, however, all converts believe the Nightmare's path is correct, even if forced upon them, and are all more than willing to convince other sylvari to choose the same path, regardless of how they go about it.

Initiates to the Court are forced to commit dreadful acts that contribute to the growing Nightmare within the Dream in order to destroy all the sympathy, empathy, or compassion they might have had left. To achieve this, the Nightmare Court holds Dark Vigils: things of legend, filled with regal depravity; twisted courtliness and sadistic tournaments that pervert sylvari chivalry.[2]

The Nightmare Court is a hierarchy, low-ranking members are made servants to higher-ranking members. Initiates gain ranks as they start to spread the Nightmare, becoming Knights and often taking on titles, such as Knight of Decay.[1]The hierarchy is respected by all Courtiers, although there have been known cases of infighting between members of the same rank.[3] The highest ranks within the Nightmare Court are known as the Retinue, elevated to such a position by the leader and given new ranks: baron, count, countess, duke, and duchess. The highest rank is that of Grand Duchess.

The Nightmare Court has taken root in Twilight Arbor, which has bloomed into their headquarters, although several smaller encampments have sprouted throughout Tyria.

The Nightmare Court was founded by the Secondborn Cadeyrn in circa 1309 AE[5] after a number of events made him question the teachings of Ventari, such as Niamh's refusal to dispatch krait younglings after a raid in a krait deep, or the refusal of the Firstborn to seek revenge on the asura for their forced experimentation on the unwilling Malomedies that left him scarred forever.[1] Cadeyrn slowly became convinced that Ventari's Tablet was holding the sylvari back and that, if the sylvari were truly to defeat the Elder Dragons, they would have to use any means necessary. But it was Caithe's own words to a hurt Cadeyrn who was being ignored by the Pale Tree: "You are either firstborn...or you are simply sylvari." that led him to create the Nightmare Court and forcefully make the Pale Tree listen to his views - an act Caithe would later deeply regret.[5]

Eventually, Cadeyrn managed to bring the Firstborn Faolain into his fold, though this was after Faolain had first touched the Nightmare herself, and she later replaced him as leader, titling herself the Grand Duchess. Since then, Faolain has attempted multiple times to bring Caithe into the Nightmare. 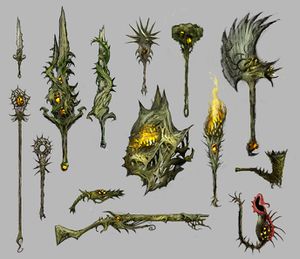