The Battle For Lion's Arch

This article is about the instanced zone. For the original 2014 version of this map, see Lion's Arch (Enemy Controlled). For other uses, see Battle for Lion's Arch (disambiguation).

The Battle For Lion's Arch 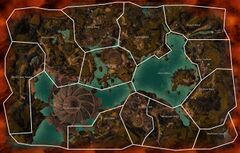 Map of The Battle For Lion's Arch

Storm the city of Lion's Arch to drive out Scarlet's invading armies. Split up to retake each front, and face the final challenge of the assault knights!
Contains story from Season 1 of Living World.

The Battle For Lion's Arch is an instanced zone in Kryta. It represents the destroyed and hostile captured Lion's Arch during the The Battle for Lion's Arch story step in Living World Season 1, and it's based on the zone Lion's Arch (Enemy Controlled) from the original Season 1 releases. Although this instance is used for a story step, it is a Public Instance and can also be entered while not on the related story step.

If all assault knights are defeated

If the assault knights flee

The map begins under complete control of Scarlet's armies, with all except three Pact Emergency Waypoints contested. The uncontested waypoints are located in:

The map indicates area under allied control with blue borders as seen in Drizzlewood Coast and World vs World.

Areas can be captured by completing events. Each event involves clearing out normal enemies, followed by a champion in a subsequent event.

Capturing the three staging areas listed above allows capture of the remaining nine areas; further waypoints become available for use at this point.

Similar to the Octovine meta event in Auric Basin, all three Knights must be killed within one minute of each other to complete the event successfully. Players should therefore organise themselves to split up between the three Knights and redistribute during the fight by using the waypoints dependent on the progress of each event.

One of the following when approaching certain Lionguard, if completed Scarlet's End:

At Postern Ward
One of the following when approaching Kasmeer:

One of the following when approaching Marjory:

At Trader's Forum
One of the following when approaching Marjory:

Rox: I'm ready when you are, mate. (upon approach)

When the Assault Knights arrive

Section-stub. This key section of the article is incomplete. You can help the Guild Wars 2 Wiki by expanding it.
Reason: Rox/Braham might have dialogue when they arrive at the Assault Knights

Kasmeer Meade: This city has friends, you dummies! You can't have it.

When fight against Assault Knight begins
Marjory Delaqua: Three of them? Scarlet never does anything small.

Rox: Assault knight ahead. Don't leave a single one standing!