From Guild Wars 2 Wiki
Jump to navigationJump to search
Stub. Key elements of this lore article are incomplete. You can help the Guild Wars 2 Wiki by expanding it.
Reason: flesh out a bit from known dialogue 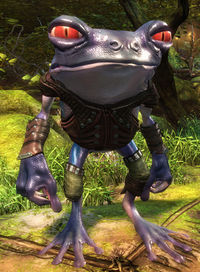 Itzel hylek are physically similar to tree frogs—lean and lanky, with long limbs and large eyes. Sporting a variety of iridescent colors, they spend most of their lives in and among the trees, building extensive settlements and compounds in the branches of the Maguuma foliage.

The Itzel are a friendly hylek tribe found in the Heart of Maguuma[1][2] that worship a nature goddess named Ameyalli.[3] They recently have had issues with Zintl zealots from the east that have been attempting to convert them to the worship of their sun god, by force as well as by deceit.