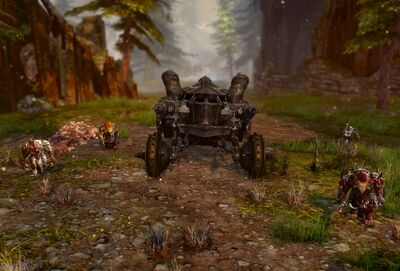 The Steel Warband's earned its reputation, and we intend on keeping it.

The Steel Warband is a Blood Legion warband led by Centurion Ryland Steelcatcher. The members eventually join the ranks of Imperator Bangar Ruinbringer's Dominion, becoming centurions leading the war effort against the United Legions in southern Drizzlewood Coast after Ryland has been promoted to tribune.

All Steel Warband members except for Ryland perish during the war in Drizzlewood Coast,[1][2] leading Ryland to join forces with the Elder Dragon Jormag.[3] Ryland, the last of the Steel Warband, is slain by Rytlock Brimstone after Jormag's demise.

Section-stub. This key section of the article is incomplete. You can help the Guild Wars 2 Wiki by expanding it.
Reason: Expand lore with events from The Icebrood Saga, including Visions of the Past.