This article is about a charr organization. For the Revenant elite spec, see Renegade.
Spoiler alert: The following text contains spoilers relating to the personal story and The Icebrood Saga. 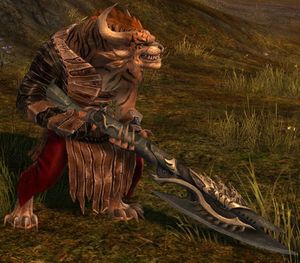 They're charr who disobeyed the orders of the High Legions. These idiots would rather die than make peace with humans, and they're dangerous.

The Renegades are charr raiders who have split from the High Legions to form their own large warband. Like their human counterparts, the Separatists, they openly and violently oppose the peace treaty forming between the charr and humans since 1324 AE. They have been engaging in skirmishes with the Ebon Vanguard just outside the Stronghold of Ebonhawke, as well as assaulting the delegations in Warrior's Crown. Their headquarters, The Thunder Den, is situated not far from Summit Peak, where the treaty is being negotiated.

Several charr warbands disagreed with the armistice between charr and humans in Ascalon as the talks for the Ebonhawke Treaty began in 1324 AE. In response, these warbands defected from their respective Ash, Blood, and Iron Legion and formed the Renegades to continue the war against humans while also opposing their fellow pro-treaty charr.

Ajax Anvilburn, the son of Imperator Bangar Ruinbringer of the Blood Legion and General Almorra Soulkeeper of the Vigil, became the Renegades' latest known leader in 1325 AE and organized several daring assaults on the ambassadors discussing the terms of the treaty at Summit Peak. The Renegades also attempted to bomb Ebonhawke from within although Warmaster Forgal Kernsson and a Recruit from the Vigil prevented it.[1][2]

Although Ajax's death at the hands of Forgal and the Recruit crippled Renegade operations for a time, the charr rebels continued causing trouble in the following years with a recent report of their activities being from 1331 AE.[3]