This article is about the landmark. For the NPC, see Avatar of the Tree.

The Pale Tree, also known as the Blessed Mother/Source, Mother Tree or Pale Mother to the sylvari, is a massive, magical, sentient tree who is the mother of all playable sylvari[1] and whose body forms the basis of their city, The Grove.

The Pale Tree dominates her location in the Tarnished Coast, towering like a skyscraper over the landscape. Her branches flower with pods containing developing sylvari and other creatures, some high enough above the ground that the fall from them could be fatal. Within the highest reaches of the Tree is the Omphalos Chamber, where she manifests her avatar and safeguards Ventari's Tablet, which holds the guiding principles she raises the sylvari to.

The Tree can be considered the ultimate ruler of her sylvari children, though her Firstborn take on most responsibilities within the Grove. Sylvari acting as ambassadors also report to the tree, but she does not actively govern or influence their everyday lives. 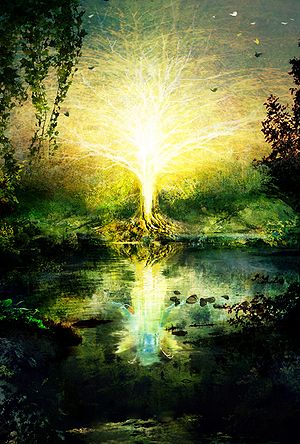 The Dream of Dreams is a mysterious state that sylvari experience prior to awakening, and of which the Pale Tree is the caretaker. Strong memories and emotions felt by her awakened children seep into the Dream, where they are added to the pool of experiences her still-developing children may drink from.

Through the Dream, the Pale Tree instills each new sylvari with an inherent sense of nobility, curiosity, and a need to explore, along with basic knowledge such as how to talk and use tools, and the assurance that she loves them. Nurtured and influenced by the deeds of the human Ronan and the centaur elder Ventari, she reminds each sylvari to hold to the hero's path of honor, courage, chivalry and compassion even as they strive for victory over the Elder Dragons.

In spite of this, a group of sylvari called the Nightmare Court seek to change the Tree. They believe that Ventari's Tablet suppresses the true nature of the sylvari, and seek to remove its influence. Knowing that intense experiences will echo in the Dream, they commit acts of depravity and evil to weaken the Tablet's influence.

The Pale Tree is in fact a type of a purified and benevolent[2] Blighting Tree—a minion factory for the Elder Dragon Mordremoth. Blighting Trees are used by the Mordrem Guard to create Mordrem versions of all creatures. They take a living "template" creature and store them in Blighting Pods, and can then create clones of them out of plant matter. The clones bear a strong resemblance to the template creature and can retain traces of their personality. Since the death of Zhaitan (and subsequent re-absorption of his magic by the rest of the Elder Dragons including Mordremoth), corpses can be used as templates as well as living creatures. Living hosts create stronger clones, however, so those are preferable.[3]

For reasons that are not quite yet understood, the creatures produced by the Pale Tree are not automatically loyal to Mordremoth. The Dream seems to provide a level of protection, and it is not until sylvari venture beyond its protection (as Scarlet Briar did), try to quieten it (as the soundless do), or until the Pale Tree itself is weakened that sylvari become vulnerable to Mordremoth's call. The existence of Mawdrey suggests that it might be to do with the fact that the Pale Tree was cultivated by someone other than Mordremoth, but the reality of the situation may be more complicated still, as in 1325 AE the existence of Malyck was discovered. Malyck more closely resembles the sylvari of the Pale Tree both physically and in personality than the Mordrem, but is not from the Pale Tree and does not experience the same Dream as the sylvari. 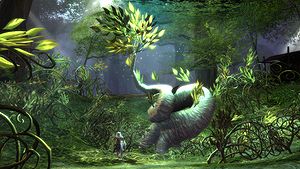 The Pale Tree in Guild Wars Eye of the North.

The seed from which the Pale Tree sprouted was found in a cave containing many others like it, guarded by powerful plant creatures. Over 250 years ago a Shining Blade warrior named Ronan took one of these seeds and placed it on the graves of his family, who had been slain by the mursaat in what was once Arbor Bay. He and the peaceful centaur Ventari then tended the young tree, and their attitudes and philosophy had a significant influence on her nature. In particular, Ventari's Tablet, carved by him prior to his death and placed at the Tree's roots, forms the basis for her own philosophy and that of her sylvari.

23 years prior to the start of Guild Wars 2, the Pale Tree awakened the first twelve sylvari. A second generation of sylvari joined them two years later,[4] with more following in greater frequency and numbers up to the present day.

Later events have revealed that the sylvari are minions of the Elder Dragon Mordremoth. The Pale Tree—and a single Firstborn who had seen the truth in her Dream—knowingly kept this secret from other sylvari and the rest of Tyria in order to keep her children safe.

After reclaiming Caladbolg, the Commander received a special blessing from the Pale Tree. It could be seen that the Pale Tree was recovering, but still not at full strength.