This article is about the WvW map. For other uses, see Edge of the Mists (disambiguation). 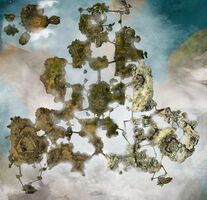 Map of Edge of the Mists

Edge of the Mists is a World versus World PvP map and game mode in Guild Wars 2. It features an action-oriented map layout, suspended in midair with narrow combat lanes, high-flying bridges, airships and bottomless cliffs. Players can enjoy Edge of the Mists while queued for a fully populated Mist War map or as a standalone competitive experience. Like most PvP maps, players must control objectives to gather points for their team. The Edge of the Mists score does not influence the primary Mist War score. However, victory in Edge of the Mists provides a supply drop to the player's homeworld Borderlands citadel.

Edge of the Mists sometimes serves as a testing ground for new WvW features. It is also home to the Mists Arena, an area for team matches or GvG.

By successfully completing events and defeating enemies, you may receive:

Edge of the Mists progress does not count towards Skirmish reward tracks.

Claim this land for your world (80)

Defend this land for your world (80)

There are differences between game play in Edge of the Mists compared to other core World versus World maps.

Current match up for Eotm are updated online for both North America and Europe.

Each match is 4 hours in duration broken up into 5 minute ticks.

Action takes place on a single map divided into 3 regions, each containing four different types of structures (objectives). Every tick, the structures controlled by each world are totaled and added to each teams's cumulative score. Capturing and holding objectives counts towards each team's score. Additional points may be given for defeating enemy players. The cumulative score is reset after every 4 hour match. 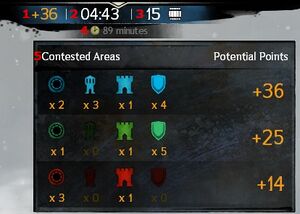 Edge of the Mists User Interface

The interface at the top of your screen shows important information