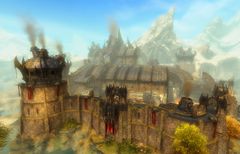 Blood Keep is a large and imposing fortress that the Blood Legion has built as a gateway to the Shiverpeak Mountains for the charr.[1] Due to this, it lies resting between the edge of the Far Shiverpeaks and Kralkatorrik's Emergence Zone in Grothmar Valley. The keep was originally made out of stone bricks, but with the rise of the Elder Dragon Kralkatorrik, the roof was torn off and the Blood Legion used Iron Legion metal to repair it, resulting in a mixture of two architectural styles.[2]