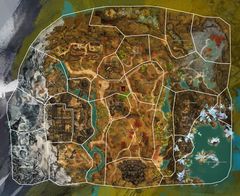 Grothmar Valley is the first map of The Icebrood Saga, released with the Prologue: Bound by Blood episode. It is located in the Blood Legion Homelands, mechanically part of Ascalon.

Through the entire Grothmar Valley, the following announcements can be heard:

The announcements below can be heard after completing Coming Home and until completion of A Race to Arms
Bangar Ruinbringer: Your cubs are the next generation of legionnaires, centurions, and tribunes.
Bangar Ruinbringer: Show them what it means to be charr. Strength. Loyalty. Victory.

Bangar Ruinbringer: Iron Legion brought their war machines with them—destruction incarnate! Be sure to check out their expo.
Bangar Ruinbringer: And Ash is here, of course—if you can find them. Their quietly lethal methods are well worth learning.