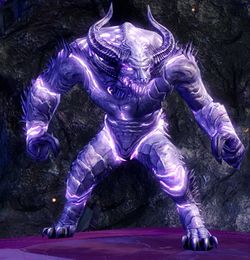 When the Elder Dragon Kralkatorrik created the Dragonbrand, every creature touched by its breath was mutated into a twisted, crystalline servant of the dragon. There is no cure once a creature has become Branded, and it will remain in Kralkatorrik's thrall until destroyed.

Branded are twisted, crystalline corruptions of their past selves with varying degrees of mutations and diminishment. By and large, their innards seem to have been changed to a glowing, purple crystal and their skin grayed and torn open; those that once had fur have now lost it and dark stone has grown atop their skin, with some becoming more stone-like than others.

Branded have been observed to be created both from magic as well as from living beings, as can be seen in corrupted sparks and earth elementals, both of which are common throughout the Dragonbrand. Ley-line magic also appears to be vulnerable to Branding, as Kralkatorrik's influence has corrupted numerous ley-line anomalies. Branded creatures appear to have their past abilities recreated to use dragon magic, with elemental fire becoming Branded fire and elemental lightning becoming Branded.

Though the term Branded is usually only used to describe creatures, Kralkatorrik has been observed to corrupt plants as well, in some cases giving them the ability to harm creatures around them.[1] Other unique forms of Branded can be created as constructs, such as in the case of the Shatterer and the Wrathbringer.

Branded tend to swarm towards energy within Brandstorms, seemingly attracted by the concentration of magic.[2] Branded are also attracted to ley-line magic though this usually results in them attacking all nearby non-Branded creatures upon absorbing enough ley energy.

Since Kralkatorrik's latest rise and flight from the Blood Legion Homelands towards the Crystal Desert in 1320 AE, the Branded began migrating south, mostly along the Dragonbrand. However, due to the Elder Dragon's swerve just north of the Stronghold of Ebonhawke, some minions found their way into the Sniper's Woods. The Branded were also drawn by the energies which the chaotic storms of the Dragonbrand, dubbed Brandstorms, exuded.

In the Crystal Desert, Kralkatorrik forced out many local ogre kraals and blockaded northern trade routes through the Desert Highlands with his Branded.

Following the deaths of Zhaitan and Mordremoth, Kralkatorrik absorbed the fallen's Elder Dragons' latent magic spectrums—like Primordus and Jormag—and flew further south into Vabbi, corrupting more land and creatures in his route before roosting near Kodash Bazaar. With Balthazar's death, Kralkatorrik further absorbed more magic, which contained the magic of the Maguuma Bloodstone and that of Primordus and Jormag, and took flight once more.

After flying into the western mountains of Kourna, Kralkatorrik began creating pockets of Brandstorms across the Crystal Desert and Elona, striking Amnoon in particular. In these Brandstorms, a new type of Branded augmented with death magic, known as Death-Branded, appeared. These Branded could raise minions from the dead, creating Branded Thralls.