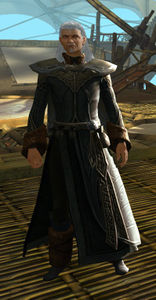 I have something I can no longer protect.

Sometime later, the Master of Peace returned to the Dragon's Lair via a portal that he and Ogden Stonehealer had set up after Glint's death, so that Ogden could guard it for the Brotherhood of the Dragon. There, he retrieved the last of Glint's Eggs, which had been in stasis since her death. When Lion's Arch was razed by Scarlet Briar, the Zephyrites returned to honor their trade agreement and help the stricken city, while they prepared to take the egg far away, to someplace where it would be safe to hatch. While docked in the Labyrinthine Cliffs, they took on the sylvari Aerin, who at the behest of the recently awakened Elder Dragon Mordremoth attempted to kill the Master of Peace and seize the egg. The Zephyrites crashed in Dry Top, where they were harassed by Inquest and skritt and aided by the Seraph. Aerin continued his pursuit of the Master of Peace on the ground, but was stopped before he could do any further damage. The Master of Peace then headed further into the Maguuma Wastes, crossing into The Silverwastes where he was trapped within the Tangled Labyrinth and fatally wounded by the Mordrem Predator. Upon the Predator's demise, the Master of Peace was on his last breath and offered the egg to the Commander of the Pact, whom has been charged with safeguarding the egg, though the egg was promptly taken by Caithe, who vanished with it as the Master of Peace reached out for her, dying at last.