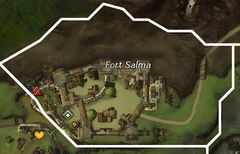 Named after Queen Salma, Fort Salma is the southernmost fort of Kryta, placed within Kessex Hills. It is constantly attacked by the Harathi centaurs, preventing them from pushing into Queensdale and threatening Claypool. After the Tower of Nightmares was built and Viathan Lake became toxic, a group of quaggans sought refuge here. It was subsequently destroyed in an attack by the Elder Dragon Mordremoth.

Protect Webb as he recovers his heirlooms (22)

Bug:
Above where a well has fallen into the collapsed ground, there is a circle of water now floating inside a tree.
Kessex Hills
Retrieved from "https://wiki.guildwars2.com/index.php?title=Fort_Salma&oldid=2545061"
Categories: