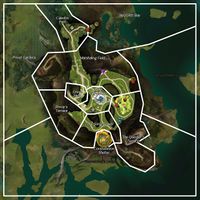 Map of The Grove

Sylvari awaken in the Grove and consider it their home. The Pale Tree stands at its heart. Also known as the Mother Tree, she gives love and wise guidance to her sprouts.

The Grove is the sylvari capital located within the Tarnished Coast. It is situated at the base of the massive Pale Tree and is formed from her network of roots and branches.

Hundreds of years ago, the Grove was the site of a human village, amongst whom was a Shining Blade member by the name of Ronan. Ronan, a soldier and a warrior, went out to war, and in his travels came across a cavern full of seeds the size of a man's fist. With one of those seeds stowed away, Ronan arrived back home, only to find that the villagers, including his daughter and the rest of his kin, had been massacred by mursaat. In grief, Ronan made a vow of non-violence and planted that seed upon the graves of his family. It was this seed, tended by Ronan and the centaur Ventari in a small sanctuary until their passing, that would later become the Pale Tree that anchors the Grove today.