This article is about the human military organization. For the equipment attribute combination, see Seraph (prefix). 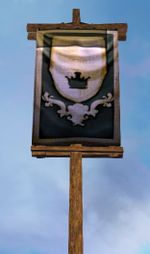 Banner used by the Seraph.

The Seraph is the largest of the three main military organizations in the human kingdom of Kryta. Wearing white armor trimmed with gold, their shields bear wings out of respect to the goddess Dwayna. The Seraph are the army, the police force, and the protectors of the populace.

The Seraph has influence across the whole of Kryta, maintaining outposts in every major town and city, and patrolling the kingdom's roads. The Seraph are also the most beleaguered military organization, struggling to stop the constant siege from bandits and centaurs while keeping troops well supplied.

Section-stub. This key section of the article is incomplete. You can help the Guild Wars 2 Wiki by expanding it.
Reason: Missing information

The Seraph was originally founded in 1079 AE by Queen Salma after their victory over the forces of the White Mantle and the mursaat. The first captain was Bartholos, a former Master Exemplar of the Shining Blade.

The Seraph are the most numerous of the Krytan military organizations. The highest rank within the Seraph is captain, and at any point in time there may be between five and ten captains. Each captain operates independently but in coordination. Each captain is responsible for a certain territory - such as the foothills of High Timber Claim, the lowlands of Nebo Terrace, or Divinity's Reach and the surrounding area.

The Seraph is normally under the command of the queen, but recently, Queen Jennah has been absorbed in duties relating to Ebonhawke and making peace with the charr; most of the command of the Seraph has been passed to Logan Thackeray. Logan is the queen's closest captain and acts as first among equals, organizing not just his own jurisdiction of Divinity's Reach, but coordinating the response to all threats to Kryta.

A special black-uniformed Seraph unit known as the Fallen Angels works within Ebonhawke, aiding the forces there and working to further the truce with the charr.