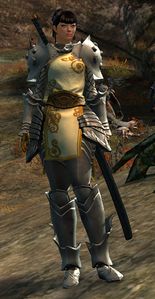 Don't give up! We can defeat these Mordrem!

Belinda Jane Delaqua[1] (born in 1300 AE)[2] is a member of the Seraph and the older sister of Marjory Delaqua.[3] Marjory often jokes about Belinda being fat, and when young, called her older sister "Big Beli". As her older sister, Belinda often looked after Marjory for their worrisome mother.

In late 1326 AE, during the attack on the Tower of Nightmares, Belinda was posted at Fort Salma and remained there until Scarlet Briar's attack on Lion's Arch had been stopped.

After Scarlet Briar assaulted Lion's Arch in early 1327 AE, she was sent on a long expedition into Brisban Wildlands to hunt down a group of black-market traders. This eventually led to her placement at Tangle Root, which was attacked by strange vines and plant creatures. After an attack by the Inquest, Corporal Jantzen ordered Belinda to return to Fort Salma to give them an update on the situation and request reinforcements. However, Fort Salma was attacked by Mordrem. Though the Mordrem were defeated, the outpost was completely destroyed and Belinda was found dead, having been entangled and strangled by a vine.

Her ghost could be seen standing at the abandoned Fort Salma for quite some time after the attack. These sightings began to become hostile, and Explorer Campbell was sent to investigate only to be assaulted by Belinda's confused spirit, who thought Campbell to be a Mordrem. Marjory and Kasmeer arrived to intervene just in time, though, and Explorer Campbell's life was spared. The sisters exchanged words before Belinda performed a ritual that bound her soul with her sword, now wielded by Marjory, and Belinda's soul was finally put to rest.

Belinda's body was buried at Shaemoor Cemetery, where her gravestone now can be found.

During The Nightmare Is Over until Battle for Lion's Arch
After the Nightmare Tower rigmarole, you have to be careful around here. Let me know if you need anything. I'm Belinda. You might have heard of my sister, Marjory. Her friends destroyed the tower.

Oh. You're friends? Were you one of the ones who helped with the tower? If so, thank you.
(If participated in Tower of Nightmares arc)

It was a group effort. Glad to help.

It was good to see it come down.
Otherwise:

To humans
Hey. I've seen you around Divinity's Reach. Welcome to Fort Salma. Name's Belinda. Belinda Delaqua. Let me know if you need anything while you're here or if you run into any trouble.

That's right. Marjory's my sister. You a friend of hers? Tell her I said hi. I don't get a chance to see her very often, being stationed all the way out here.

Oh. You're friends? Were you one of the ones who helped with the tower? If so, thank you.

It was a group effort. Glad to help.

It was good to see it come down.

Greets
Tell me you didn't touch anything toxic.
This is a temporary assignment for me. I hope...
Wash your hands often, citizen.