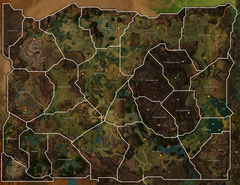 Unclaimed by any nation or race, the Brisban Wildlands are a haven for secretive asura labs, bandit encampments, and large communities of skritt. Its eastern regions are dominated by Mount Gnashington, but the great cavern-riddled mountain gives way to more desolate terrain to the west.

The Brisban Wildlands is a zone in the Maguuma Jungle. This mostly unsettled stretch of land holds many dangers as well as relics and ruins from times long passed.

The river flowing from this map into Metrica Province is the Ullen River.