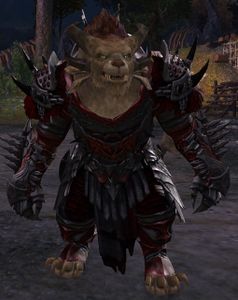 Ryland might be young, but he's no cub. He's a strong leader with a mind for strategy and a good head on his shoulders.

Ryland Steelcatcher is a centurion of the Blood Legion, leader of the Steel Warband and a tribune of the Dominion. He is also the cub of Rytlock Brimstone and Crecia Stoneglow.

Ryland Steelcatcher was born as the cub of Crecia Stoneglow and Rytlock Brimstone, being the latter's eldest son. After Ryland had been weaned, his dam left him to be raised in the Blood Legion's fahrar. He did not meet his sire Rytlock much due to Rytlock being abroad on missions, and the two became distant.[1] The fahrar's primus used to beat the Blood Legion cubs with a rod to toughen them up; however, Ryland stood up to the primus one day and made him stop the beatings, earning the name Steelcatcher that he would use upon joining the Steel warband.[2]

While growing up, Ryland caught the attention of Imperator Bangar Ruinbringer who took him under his wing and became a father figure to Ryland in Rytlock's absence.[3] As the years passed, Ryland showed his talents as a soldier and gained fame within the Blood Legion, forming the Steel Warband with Cinder Steeltemper, Vishen Steelshot, Ranoah Grindsteel, and Nicabar Steelweaver. However, some Blood Legion soldiers pondered whether Ryland would ultimately turn out to be a reliable individual like his dam or a loose cannon like his sire.[4]

Once news spread of the Pact's victory against Kralkatorrik and Aurene's ascension as a new Elder Dragon in 1332 AE, Crecia convinced Bangar to sign a truce with an atoning Flame Legion splinter group led by Efram Greetsglory. Deciding to host an All-Legion Rally to commemorate the occasion, Bangar had invitations sent to his fellow Imperators as well as other notable Tyrian figures such as General Almorra Soulkeeper of the Vigil, the Pact Commander and members of Dragon's Watch who had contributed to Kralkatorrik's demise. The Blood Imperator ostensibly framed the invitations to be for a celebration of Kralkatorrik's death while using the opportunity to have the High Legions gather in one place so he could host a political rally and promote his views of charr unity under strong leadership in the changed world.

To cement the Blood Legion's symbolic strength in the opening ceremony, Bangar had Ryland, who had recently been promoted as centurion, deliver a killing blow to a Branded devourer in ritualistic combat. As the fight was about to conclude, more Branded erupted from the ground much to the audience's surprise, and the guests had to defend themselves from the sudden attack. Rytlock, the Commander and their ally Braham Eirsson subtly helped Ryland by using nearby harpoons to hold down the Branded broodmother so Ryland could deliver the killing blow. Before the centurion could do so, however, Aurene flew by the arena and Branded the devourer broodmother in her wake, startling and angering Bangar and many other charr who viewed the inteference of the Elder Dragon as the Pact Commander flaunting their power in front of everyone.

As the opening ceremony concluded, Ryland met with the trio who had helped him during the battle with the broodmother. Rytlock tried to reach out to his son by suggesting how Ryland could improve his attacks, to which the young centurion responded coolly. Ryland got along better with Braham, however, and offered himself as a guide to the norn during their tour of Grothmar Valley.

The pair visited many locations in the valley with Ryland offering Braham as much ale to drink as the norn desired. During their tour Ryland told Braham about his parents and charr customs of raising cubs. He also suggested that Braham did not have to be held back by his mother's legacy and could choose another name for himself besides Eirsson. When the centurion learned about Braham's bad blood with his former norn guild, he reminded Braham that the guild was the norn's warband and that Braham should not sever ties with them. He also told Braham that everyone in the valley had heard about Braham using his fire-enchanted bow to break the Fang of the Serpent and his failed mission to assault Jormag.

During the later stages of the tour, the pair confronted angry charr who kept calling Braham names. Ryland escalated the situation by telling the offending charr that Braham was strong enough to take them on, and Braham himself ended up involved in the brawl to defend his honor. The brawlers were arrested and taken to the Brig to cool off, and Ryland spoke on Braham's behalf so the Blood Legion would not press charges on him for disturbing the peace. The charr let Braham to stay in the cell to sleep off the effects of alcohol while Ryland departed from the Brig.[5] Unbeknownst to Braham, however, Ryland did not leave empty-handed: he had confiscated Braham's bow, his true target, in order to deliver it to Bangar for the next stage of the Blood Imperator's plan.[6]

Before leaving to rendezvous with Bangar, Ryland reached out to the Renegades who had arrived in the valley. He ordered them to kidnap the Commander's asuran companion Gorrik, who Bangar believed might have useful intel on Aurene's strengths and weaknesses, and dispose of him once the asura was of no more use to them.[7]

Ryland and Bangar slipped out of the Blood Keep while being joined by several dozen heavily armed warbands from the Renegades and all the four legions whom the Blood Imperator's agents had rallied behind him during the festival. They headed for the Shiverpeaks Pass where they used Iron Legion explosives to blow up the bridge behind them to prevent anyone from following them. Before heading farther north in the blizzard, Bangar addressed the assembled warbands while holding Braham's bow in his claws and announced his plan in clear terms: the charr would even the odds against Aurene by getting their own Elder Dragon—Jormag. Committed to the cause, Ryland stood beside Bangar during the speech and motioned the crowd to cheer at the Blood Imperator in support.

The charr army ventured into Bjora Marches where several charr were affected by Jormag's whispers via the dragon champion Drakkar. Not wanting to risk losing his army to the Ice Dragon, Bangar resolved to take Ryland with him as the pair traveled to Drakkar to kill the champion and silence the whispers. Although they were being tracked by Crecia and Rytlock who tried to catch up with them unseen, the charr army managed to keep their distance.[8][9]

Bangar and Ryland tracked down Drakkar to an icy cave south of Drakkar Lake in 1333 AE just in time to witness the Pact Commander and Braham, who had been reunited with Crecia and Rytlock, being close to succumbing to the power that had been controlling Drakkar all along: the Whisper of Jormag, a piece of the Elder Dragon. Bangar rallied the nearly defeated heroes and told them to stand up as they faced the Whisper together. Using Braham's bow, the Blood Imperator ultimately vanquished the weakened Whisper and gloated his victory to the party. When the party confronted Bangar about the theft of the bow and that he tried to claim credit for the kill, Bangar revealed his aspirations to become Jormag's champion while he intended to use Drakkar's death as proof that he alone could control the Ice Dragon. Rytlock tried to convince Ryland to stop following Bangar, but Ryland remained loyal to his imperator and responded by asking where Rytlock's loyalties lay as a member of the Blood Legion.