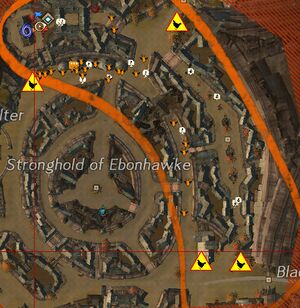 Entering the instance
Kasmeer: Commander! Crecia's securing the Postern Gate, but it's only a matter of time now.
<Character name>: The destroyers are attacking already? Did you manage to call for reinforcements?
Kasmeer: I did. I received word of a number of allied factions in the area.
<Character name>: Yes, but will they arrive in time is the question.
Kasmeer: Gotta trust them. But right now, we need to rally the locals.
<Character name>: They don't want to fight? It's their city.
Kasmeer: They're just nervous having a charr imperator fighting from the inside out.
If charr or human:

<Character name>: It's been ten years since we signed that treaty. How much longer are we gonna have to put up with this?

<Character name>: It's been ten years since the treaty was signed. How is this still acceptable?

Kasmeer: They're on our side, Commander. But this is new to them. They just need a little push. C'mon, let's muster the troops.
Crecia Stoneglow: I hope you're talking some sense into these humans—destroyer activity is on the rise over here!

After Defend Ebonhawke's gates, and rally defenders against the destroyers
Crecia Stoneglow: Commander, the Postern Gate's fallen! Fall back! Kas, where are those reinforcements?
One of the following:

(if Faction Aid is Charr)

Kasmeer: There! Crecia, look! More charr, and enough ordnance to stop those destroyers in their tracks!

(if Faction Aid is Crystal Bloom)

Kasmeer: There! The Crystal Bloom-they made it! We should protect those healers—they can help us manage our losses.

(if Faction Aid is Ebon Vanguard)

Kasmeer: There! The Ebon Vanguard! They'll rally the city—help us push the destroyers back underground!

(if Faction Aid is Deldrimor Dwarves)

Kasmeer: There, look! The dwarves made it—looks like they brought that alchemical acid, too! Let's get it on the field!

(if Faction Aid is Flame Legion)

Kasmeer: There! Crecia, look! Flame Legion backup just made it onto the field! Time to fight fire with fire!

(if Faction Aid is Skritt)

Kasmeer: There! The skritt actually showed up! Looks like they might need some direction from us, though. Let's help them out.

Crecia Stoneglow: Nice work with the locals. Wasn't sure you'd be able to convince them I was here to help.
Kasmeer: They weren't sure what to make of you. Lot of these people spent their lives trying to keep the imperators out.
Kasmeer: But actions speak louder than words. And much louder than decade-old pieces of paper.
Crecia Stoneglow: I'm done squinting at treaties. If they can't see what I'm trying to do with the charr, they aren't paying attention.
Kasmeer: They are paying attention. That's why they're fighting with us.

After Defend the inner district of Ebonhawke from destroyers
Kasmeer: By the gods—!
Crecia Stoneglow: It came from the center of the stronghold!

During fighting Destroyer of the Third Fortress
Crecia Stoneglow: Damn thing dug right under our defenses! C'mon, everyone! You want your city to fall to some overgrown bug?

After defeating the Destroyer of the Third Fortress
<Character name>: Well. Looks like they're retreating for now. Everyone all right?
Kasmeer: The stronghold stands. At least for another day.
Crecia Stoneglow: You helped. But the Treaty of Ebonhawke's ten years old. It's time we moved past it.
<Character name>: Moved past it how?
Crecia Stoneglow: Anyone can tear up a piece of paper—throw the world into disarray. We either trust each other or we don't.
Kasmeer: I think today was a step in the right direction.
Crecia Stoneglow: There's more to be done. But I think you're right. Thanks, Kas. Commander.

They'll repair the damage. They always do.

Kasmeer: Yeah. They're a proud people, surviving worse than this. But even so...I hate seeing them constantly under siege.
Kasmeer: It sets the mind a certain way, always having enemies at the gates. First charr, then Renegades and Separatists...
Kasmeer: Maybe after Crecia's dealt with the Renegades and we've dealt with Primordus, Ebonhawke can finally...y'know, relax.

Kasmeer: Worried, no. It just needed to be...handled properly.
Kasmeer: Ebonhawke—I mean, aside from the Separatists—I think they're ready to move on.
Kasmeer: Bangar was saying things that really scared these people. And Crecia used to be his second-in-command.
Kasmeer: We just had to remind them what Crecia was fighting for up in Drizzlewood. That helped a lot.

Have you been working with Crecia at all after Drizzlewood?

Kasmeer: Yes, quite a bit. She's been working to clear up the rest of the Renegades and Bangar's Dominion.
Kasmeer: I spent a lot of time with the charr in Drizzlewood, so Crecia asked if I could help finish what we started.
Kasmeer: It's important for human-charr relations that we very publicly, very loudly go after these groups.
Kasmeer: You saw today what kind of effect that can have. It's the difference between peace and war. It's worth it.

Optionally talking to Crecia
Crecia Stoneglow: I was worried about these people, but they came through in the end.

They trust you now.

What were you doing in the Fields of Ruin?

Are the United Legions still united?

Crecia Stoneglow: The charr legions are still the legions. Warband as family, warband above self.
Crecia Stoneglow: But it's clear we need stronger cohesion among the imperators. Not sure we'd survive another Bangar.
Crecia Stoneglow: To answer your question: yes, the United Legions remain united. But that's short term. And that worries me.

How is Mia Kindleshot as Iron's new imperator?

Crecia Stoneglow: Cut from the same cloth, that's for damn sure. Not surprised, considering the company Smodur liked to keep.
Crecia Stoneglow: Fortunately for us, she doesn't have the same...aspirations that Smodur had.
Crecia Stoneglow: Khan-Ur's a tricky subject. Just saying you want the job can get you shanked. She knows better.
Crecia Stoneglow: Aside from that, the rank and file like her and she's promoted loyal tribunes. Kindleshot'll do Iron proud, I think.

Thanks for your help today.

Anomaly:
The "Fighters rallied and prepared for battle" can be easily done by talking to the same NPC. You can talk and recruit the same NPC everytime the NPC enters combat.