Map of Fortress of Jahai 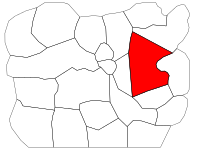 The Fortress of Jahai, officially known as Jahaidara, is an area in Jahai Bluffs. It is the largest Kournan military outpost outside of Gandara, the Moon Fortress, and marks the border between Kourna and Vabbi.

Jahaidara was built in 899 AE over the location of the Battle of Jahai, where Palawa Joko had been defeated by Warmarshal Turai Ossa in 862 AE.[1] It became the largest military outpost in Kourna after Gandara, the Moon Fortress, and served as General Morgahn's main base of operations during Warmarshal Varesh Ossa's campaign to begin Nightfall in 1075 AE.

Since Palawa Joko's return and subsequent conquest of Elona circa 1175 AE,[2] the fortress was annexed into the lich king's united kingdom from which the Awakened and the Mordant Crescent watched over both Kourna and Vabbi. After Joko's demise in the Battle of Gandara in 1331 AE, a summit was held for various rival factions in Jahaidara to decide upon a post-Joko ruling council for Elona in the interregnum period. The summit came to an abrupt end when the Death-Branded Shatterer invaded the fortress and forced the delegates to flee, and its Branded minions subsequently took over much of the Inner Keep, leaving few sections of Jahaidara safe to access.

Since the Branded invasion, adventurers have braved the dangers of the fallen fortress while hunting for valuable chests found within as well as bringing down bounties such as the Branded Judge Aasma. The Elder Dragon Kralkatorrik's actions in the Mists caused unstable rifts to appear throughout Jahai Bluffs, including Jahaidara where mysterious humanoid soldiers in advanced gear were reported to appear for brief moments before they vanished into the rifts again.

The Fortress of Jahai is divided into multiple sections. The Archon's Retreat in the northwest contains the private quarters of the Archons of the Mordant Crescent. The Jahai Great Hall in the center is for grand meetings. The Ring of Judgment in the western portion of the Grand Hall is for lengthy discussions between generals and for issuing decrees like the Proclamation of Palawa Joko's Defeat. Farther west on the very edge of the western walls lies the Sleepless Beacon marking the way to the village of Crescent's Prosperity. In the southwest lie the quarters of Noble's Walk which oversee the Rilohn Falls in the south. In the east lies the enclosed and labyrinthine inner section of Jahai Keep where Archon Iberu has stored his treasure,[3] and the expansive Fortress Courtyard.

Prepare to run into the labyrinth of the Inner Keep (80)

Arbiter Lo Loju: Adventurers! Care to risk life and afterlife for a chance at unimaginable treasure? Line up and...wait a little bit.

Arbiter Lo Loju: Are you quick? How about clever? Incredible riches—sans a ten percent processing fee—are just beyond this barrier!

Arbiter Lo Loju: Find a gullible hero on a fast mount by the time the crystal breaks. That's all. You can do this, Loju.

PA System: Anyone? Anyone in here? No? Okay. I'll leave, then.