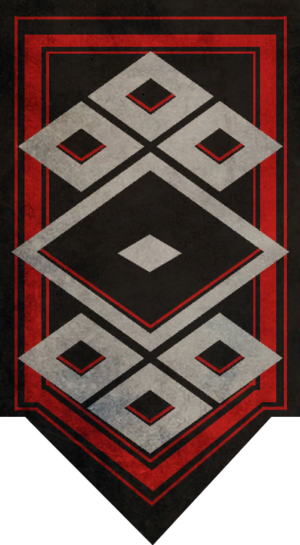 Banner of the Inquest.

Gathering information in its pure, crystalline form is their intention, and they will stop at nothing less than the sum of all knowledge. Indeed, the ultimate goal of Inquest research is to achieve control of the Eternal Alchemy, and with it, all of Tyria.

, or "Asuran Inquisition", is a prominent asuran organization active throughout much of the continent of Tyria. While closer in size to the asuran colleges, the Inquest functions as an oversized "megakrewe,"[1] with a notable difference in the permanence of membership (in a regular krewe, asura come together to complete a specific task or research objective, then disband or are released from the krewe by its leader).[2] Their primary guiding principle is that the Eternal Alchemy is a thing to be mastered and used, rather than merely understood, for the ultimate purpose of establishing asuran dominion over other species. The other guiding principle for which the Inquest are infamous is the lack of ethical principles in research methodologies and institutional actions.

Although a relatively new organization, the Inquest has garnered a large amount of influence within asuran society, even going so far as to have a member, Councillor Yahk, with a seat on the Arcane Council. Members of the Inquest do not go through a traditional apprenticeship, but a system of corporate training structured like a series of aptitude tests. When a member completes their task, they are immediately given the next level of clearance. The Inquest do not share their discoveries, and will occasionally even sabotage the work of one of the colleges if it is seen as impinging on their proprietary research areas.[3]

The Inquest seems to function as a pyramidal hierarchy. Superiors direct those below them, who in turn direct those below them. The Order of Whispers, which has been monitoring Inquest activities, believes that such a hierarchy is meant to be a security measure to prevent leaking precious knowledge outside the organization.[4] Because of this secrecy, it is currently unknown if the Inquest is led by a council or an individual.

The Inquest runs a very tight ship—once an asura joins it, they are expected to be members for life. The organization believes that everything their members learn is proprietary knowledge, and the Inquest thus have the right to reach into the members' brain and take it out, if they so choose.[5]

The Inquest has taken extreme steps to punish or reclaim those who try to defect from the organization. The agents are especially tough on those who try to get out if those people have valuable or incriminating information which the Inquest wants to keep to themselves. However, leaving the Inquest does not always lead to an automatic death sentence, but those who leave always have to spend the rest of their lives looking over their shoulders. If the person who wants to leave has leverage over the Inquest such as incriminating evidence (that will be released to authorities or rival krewes if anything happens to the defector), or it is not politically expedient to exact retribution at the moment (because the person in question has friends in high places, or the heat is on and the Arcane Council is currently watching the Inquest's activities closely), the Inquest will bide its time and patiently wait for an opportunity to act.[6]

The Inquest was founded quite recently, although when exactly is not clear. They are at least old enough to have been the first asura to meet the sylvari, with Kudu, a high-ranking member, being the one responsible to what happened to Malomedies.[verification requested] A commonly cited reason for the founding of the Inquest was the destruction of Quora Sum during the Elder Dragon Primordus's invasion. The founders of the Inquest viewed the amount of knowledge lost in that event as a massive "signal drop", and aspired to found an organization structured such that such loss of knowledge could never happen again.[3]

In 1324 AE, the Inquest were running an experiment on chaos magic at the Thaumanova Reactor in Metrica Province, with the sylvari Scarlet Briar as a "special consultant". The experiment helped to identify the network of ley lines carrying magic around the world, but caused a large-scale natural disaster in the region.

Later that year, the Inquest built the Infinity Coil facility, run by Kudu. Kudu was a former apprentice of Snaff, who discovered that the Elder Dragons exuded their own unique dragon energies, but stopped research because he felt it was too unstable to work with. At the Infinity Coil, the Inquest were removing and concentrating these draconic energies and using them to create dragon minions that only they could control, aiming to rival the power of the Elder Dragons themselves. During this time they also attempted alliances with the dredge as well as with the human bandits and Nightmare Court in the Sinister Triad.

Kudu's plans at Sorrow's Embrace and the Crucible of Eternity were stopped by Zojja, Logan Thackeray, Rytlock Brimstone, and the Pact Commander in 1325 AE. After the defeat of the Elder Dragon Zhaitan, Inquest operatives led by Operative Belka and Operative Brie were found in Arah where they enslaved Risen with dominating devices while showing an interest in mursaat technology in order to phase into the Mists. However, they were swiftly defeated by the Pact Commander's party.

In 1326 AE at the behest of Scarlet Briar, the Inquest formed an alliance with some pirates to form the Aetherblades and took responsibility for the maintenance of the stolen Pact airships.[7] Their role within the alliance seemed to diminish with time, as they were not seen towards the end.

In 1327 AE, the Inquest appeared at the Zephyrite crash sites in Dry Top and showed hostility towards anyone trespassing in their territory. They became interested in the asuran prodigy Taimi's Waypoint Recalibration Device and chased after her, breaking her golem Scruffy during the pursuit. The Inquest squad was subsequently confronted and defeated by the Pact Commander's party who had come to Taimi's aid, however.

In 1330 AE, Pact forces following the rogue god Balthazar to Draconis Mons discovered Inquest forces already occupying the cavern. Inquest Datapads scattered around their camp in Rata Arcanum suggested that Balthazar, under the guise of the mursaat Lazarus, had paid the Inquest to set up a defensible camp within the cavern, possibly to hinder the Pact's efforts. While scouting the area, Inquest agents discovered evidence of the asuran inventor Zinn's former presence in the area and immediately began searching for artifacts and remains of his. Their efforts were significantly hindered by the presence of the druid spirits, who attacked several of their agents. At some point, Inquest leaders discovered Lazarus's true identity as Balthazar, but decided to keep this information among the upper ranks while focusing solely on the excavations at Rata Arcanum.

At some point in the past, the Inquest had set up a base hidden deep within the ancient, ruined city of Fahranur on the Isle of Istan. However, the base was eventually invaded by Awakened whom the Inquest mistook for Risen. The Inquest in the base were killed and subsequently Awakened to serve Palawa Joko, providing information about the use of asura gates as well as experiments. A chorus of Awakened Inquest were used to tamper with Taimi's Scruffy 2.0 in 1330 AE in order to turn the golem into a death trap, and they delivered Joko's sinister declaration of war to the Pact Commander who had arrived in the city to save Taimi before swarms of Awakened Inquest tried to take down the Commander's companions.

Despite their losses on Istan, the Inquest continued researching the Scarab Plague, an ancient disease hosted by scarabs discovered in Fahranur, and its effects on various races as a biological weapon as they captured Elonian humans for experimentation. The Olmakhan charr tribe also served as test subjects for the Inquest and their plague samples on Sandswept Isles. At the same time in their main Elonian complex, Rata Primus, the Inquest upgraded their ancient golem models and developed new marks of them like the ballista, phalanx and the feared exterminator golem, while studying Zinn's salvaged golems which they had managed to recover from Rata Arcanum.

After the a malfunction at Rata Primus had caused an automated launch of assault golems on the nearby Olmakhan village of Atholma in 1331 AE, the Olmakhan decided to launch a counter-attack on Rata Primus with help from the Pact Commander's Dragon's Watch guild. However, during the Olmakhan assault on the complex, the Awakened hijacked the Inquest's asura gate network to launch invasions on Tyria, led by Palawa Joko. Joko stole the scarab plague sample, triggering the self-destruction of the heavily damaged cube-shaped complex. The invasion on Rata Primus left many members of the organization dead, whom Joko promptly reawakened as Awakened Inquest. He then led his undead servants to the Domain of Kourna to continue their research on the plague samples at Gandara, the Moon Fortress and other concealed labs, until his demise during the Battle of Gandara.

The Inquest had been using their breakthroughs at Lab Sigma-05 to develop even more advanced golems such as the DERV and Branding-proof Warehouse Defense Golems. Following the destruction of Rata Primus, however, the Pact took the golems over and then used them against Branded during the subsequent campaign against Kralkatorrik.