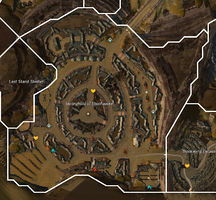 Map of Stronghold of Ebonhawke 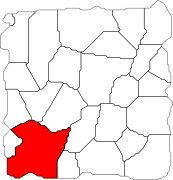 Location within Fields of Ruin

This section only details the recent history of Ebonhawke. For details of its origins, see the Founding.

The Stronghold of Ebonhawke is a human enclave-fort to the south of Ascalon and the one of the last remaining Ascalonian settlements. It is frequently attacked by Separatists and inhabited by many of their sympathizers.

Ebonhawke was once a small fortress, nestled in the southern juncture of Ascalon and the Blazeridge mountain range. The steep mountains on several sides provided an ideal location just north of the Crystal Desert. With the Searing, its location grew in importance, and King Adelbern of Ascalon saw it as an ultimate bastion against the charr incursions. In the end, before the Foefire, he dispatched the Ebon Vanguard there to reinforce it.

And reinforce it they did. They spread the initial fortress walls outward, continuing to build as they took more territory against the regular charr raids. They erected the mighty Hawkgates at the northern entrance to the city. They mined the hills behind the walls for stone and made more living space for the refugees from the abandoned human cities to the north. And they trained their growing populace in the dangers that stood right outside their gates, from the siege engines of the charr.

Prior to the beginning of peace negotiations between the charr and humans, ever since the fall of Ascalon City, the charr laid siege to the fortress giving no rest until now. Over time, many charr thought the fortress is not worth the effort, so only the Iron Legion and a few individual warbands continued to attack the fortress with their siege weapons. These days the fortress sees most assaults coming from within, from the human Separatists and charr Renegades unsatisfied with the truce.

In 1320 AE, Queen Jennah had the asura gate fixed after years of mismanagement and created a stronger alliance between Kryta and Ebonhawke, allowing refuge and support for those within the city fortress. During Kralkatorrik's rise, the Elder Dragon passed nearby Ebonhawke on his way to the Crystal Desert. Once he passed, the freshly corrupted branded ogres and hyenas assaulted the fortress and decimated the charr warbands who laid siege at the time. Though the joined forces of the Seraph, Ebon Vanguard, and the charr prisoners led by Logan Thackeray managed to survive the assault, one hundred and thirty-three Seraph were killed, including Logan's brother, Dylan. This event became known as the Ogre Revolt.

Help the people of Ebonhawke (30)

Head to the farms west of the vista, along the southern edge (near the moas), you'll be able to jump on a cliff; from there head east along the cliff until you reach the vista.

Drive Separatists out of Kestrel Market (30)

Get the animals back in their pens (31)

Angry Farmer: I was born inside these walls. I'm probably going to die trapped inside them.

Angry Farmer: If the charr think they can come here, me and my meat cleaver will tell them otherwise.

Child: When I grow up, I'm going to be brave hero!

Fianna: Did you see that norn come through here the other day? Now that's a man!

Fianna: Where did he...Oh he's probably down at the pub again.

Separatist Sympathizer: The Separatists are right. If we sign this treaty, we'll become traitors to our own heritage.

Separatist Sympathizer: Listen to me! My uncles died in the sieges. Queen Jennah can choke on that treaty.

Separatist Sympathizer: Queen Jennah never suffered through our war. The Separatists are right. No treaty. Not now, not ever!

Separatist Sympathizer: I agree with the Separatists. No treaty, Never.[sic]

Separatist Sympathizer: No peace! Not while our dead go unavenged!

Separatist Sympathizer: The charr won't be happy until we're all dead. Stand with the Separatists!

Separatist Sympathizer: Stand with the Separatists! No queen will tell us what to do.

Separatist Sympathizer: Do you think the charr will just leave after the treaty? Arm yourselves! Fight for your survival.

Citizen: I wish I had hair like a Sylvari.

Citizen: Dragons? Bah! Never seen 'em. All fantasy if you ask me.

Citizen: I'd take a strong Ebonhawke ale over watery Divinity beer any day.
Barmaid: You can taste a difference?
Citizen: It's all about the soil. We got good soil here.
Citizen: That's what we're fighting for, isn't it? This is our soil. Our land. Our ale!

Worker: If we increase the sympathetic resonance, perhaps the power output can be boosted.

"Ebon Vanguard Soldier": Tell no one of this place, or what you see here.

Lorro: My Krewe is on the verge of a breakthrough.

Lieutenant Davel: All right, men. Listen up. I don't want my soldiers tired or hungry out on duty. Take a break and grab some rations before your next patrol.
Vanguard Soldier Erith: I'm not on the duty roster today, sir. I'd like to stay and train some more.
Lieutenant Davel: Very well. Keep an eye on things, soldier.