Bjora Marches is a zone in the Far Shiverpeaks, mechanically part of the Shiverpeak Mountains. It was the home of Jora and Svanir before Svanir became the Nornbear, and now serves as the location of the Vigil's northernmost base, Jora's Keep, which stands against the Elder Dragon Jormag's forces in northern Tyria.

Along the northern edge of Bjora Marches was Darkrime Delves, an ancient cave complex believed by the Stone Summit to house ancient dwarven relics.[1] It was once taken over by a powerful female jotun leader.[2] Ruined shrines of various Spirits of the Wild can be found throughout the region, while the grand Sanctum of Raven stands against the test of time as a monument dedicated to the wisdom of the norn.

The lands have been altered by Jormag's freezing influence in the past 150 years since the Elder Ice Dragon made its way south. Since then, Sons of Svanir and Icebrood have spread their influence to the region while gathering an army for the Fraenir of Jormag, horrific Boneskinners lure unsuspecting victims to their doom in the wilderness, and enigmatic Aberrant and Fallen creatures haunt magically potent areas in the region as well as shrines of the lost Spirits of the Wild, Ox, Eagle, and Wolverine. 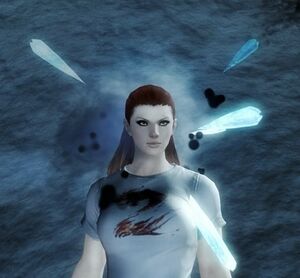 Effect on player character during the dialogue.

In random places in Bjora Marches, whispers from an unknown source can be heard. Two randomized lines are spoken.

Followed by one of the following: