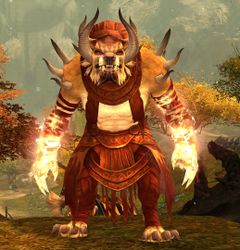 Here's to making this new world better than the old one.

Efram Greetsglory is the acting Imperator of the Flame Legion after Gaheron Baelfire's death in 1325 AE. Though not a true imperator yet, Efram has taken up the mantle of leadership for a Flame Legion splinter group through negotiations for a cease-fire with the other High Legions via the Blood Legion Imperator Bangar Ruinbringer. Unlike many other Flame Legion members, Efram shows kindness towards female charr and has progressive ideals. He is very soft-spoken and compassionate towards cubs, especially his daughter Prisca.[1]

Following Flame Imperator Gaheron Baelfire's death in 1325 AE, the Flame Legion fractured into rival splinter groups vying for the late Imperator's vacant throne. While some Flame Legion members advocated allying with the dredge to form the Molten Alliance and began experimenting with infusing dredge weapons with fire magic at the cost of several charr's lives by 1326 AE, Efram Greetsglory was outspoken in his resistance to the Molten Alliance.[3]

Efram eventually became the leader of a more progressive Flame Legion splinter group which desired a cease-fire with the other High Legions. Unlike some Flame Legion officers, he showed kindness towards female charr and was compassionate towards cubs, especially his daughter Prisca.[1]

It was not until 1332 AE that Efram's faction was contacted by Tribune Crecia Stoneglow of the Blood Legion who invited them to the political All-Legion Rally in Grothmar Valley to celebrate the Elder Dragon Kralkatorrik's death and the strength of the united charr legions. Efram accepted Blood Imperator Bangar Ruinbringer's terms of a truce even though his faction had to give their cubs up to be raised in the fahrar as members of the Blood Legion as a sign of goodwill.

In the festival's opening ceremony, Efram's faction was seated next to the troops of Ash Legion's Imperator Malice Swordshadow. He witnessed Crecia and Rytlock Brimstone's son Ryland Steelcatcher fighting Branded devourers and ordered his followers to assist the other legions when more hostile Branded unexpectedly erupted from the ground around the audience. Efram, like the other charr present, was shaken by the new Elder Dragon Aurene's sudden fly-by and Branding of the attacking devourer broodmother. He retreated to the Flame Legion Camp in the valley to look after his people once the ceremony had concluded.

Shortly after, Efram was approached by the Pact Commander, and he denied being the Flame Legion's new Imperator as he had not been officially recognized as such yet. When the Commander attempted an apology for Aurene's interference in order to ease Efram's anxiety, Efram gently cut the Commander off by stating that both his splinter group and Aurene were still finding their place in the new world so he bore no ill will towards the Elder Dragon's actions. He revealed that the Flame cubs, including his daughter, had had trouble adjusting to the Blood Legion's fahrar as they were being bullied by other cubs who still viewed the Flame Legion as an enemy to fight. He accepted the Commander's offer to console the cubs and gratefully witnessed the Commander convincing Prisca to return to the fahrar and not retaliate against the Blood Legion's cubs.

Some time later, Efram learned from Prisca that strange, older charr had appeared in the fahrar in an attempt to recruit Prisca and other cubs to their cause. Realizing that the recruiters might have been the warmongering Renegades, Efram told Kasmeer Meade, one of the Commander's companions who had been observing the Flame Legion's magic since the ceremony, about his findings.

As Bangar would not believe that a threat might be lurking in the valley, the trio resolved to let Crecia, Bangar's second-in-command, know about the threat instead. However, Efram pointed out that finding information would be hard as the local charr would not be forthcoming to any of the trio due to either their background or, in the Commander's case, a relationship with Aurene whom many charr viewed with suspicion. Kasmeer resolved the issue by using a mesmer spell to make the Commander resemble Ryland. Efram supported the idea because Ryland, a reputable centurion and hero of the festival, could walk about the Blood Keep without anyone raising an eye. He suggested that the Commander start searching for clues about Renegade infiltrators in the fahrar where Prisca had first spotted the recruiters.

Some time later, Efram was approached by Marjory Delaqua who told him that the Commander had gathered evidence about Bangar having slipped into the Shiverpeaks Pass with several dozen armed warbands; the Blood Imperator had not only been aware of Renegade activities in the valley but had been working with them for some time. Efram joined Marjory, Braham Eirsson and Imperators Smodur the Unflinching and Malice Swordshadow as they hurried to the pass to find the Commander, Crecia and Rytlock who had gone after Bangar's renegade warbands.

They reached a signal fire which the Commander's party had lit but were unable to advance farther due to the worsening weather. They soon met with the Commander's weary party who revealed that Bangar had stolen Braham's fire-enchanted bow and taken the warbands deeper north to "even the odds" and secure the future of the charr. During the conversation it became apparent that the Blood Imperator was not going after Aurene but was intending to get an Elder Dragon of his own—Jormag—to act as the charr's counter against Aurene. Crecia lamented not realizing Bangar's ambitions earlier and prepared to apologize to Efram for letting Bangar recruit several Flame Legion members into his Renegade army, but Efram was sympathetic towards her and did not bear a grudge.

In a subsequent talk with the Commander, Efram admitted that many of his people felt oppressed as refugees and would thus easily pledge themselves to the Blood Imperator's cause; the Flame Legion splinter group had missed the fight and wanted to be seen as equals among the other legions. Efram warned the Commander that a fight would be inevitable for anyone involved in this conflict, and he would not let warmongering ideology grow roots in his legion again after all the damage such views had caused in the past centuries. As far as Efram was concerned, however, his truce with the High Legions would hold for the time being, and he would stay in Grothmar Valley and help Crecia in any way he could.

Following the deaths of Jormag and Primordus in the clash at Anvil Rock, Efram and his daughter Prisca visited the Crown Pavilion in Divinity's Reach to attend the Festival of the Four Winds. In a conversation with the Commander, Efram explained that his visit had the diplomatic purpose to ease tension between charr and humans after the charr civil war and extend a hand in peace to show Krytans that the Flame Legion of old was no more under the new imperator. While observing festive visitors battling watchknights which had a glamour making them resemble the Flame Legion, Efram hoped that such violent activities against charr simulacra would not fan the embers of old grudges between the once rival races.

[Group Event] Escort Iron and Flame forces to the bridge (80)

Assault on the Frost Citadel

Conjure Lightning Charges - Skill uses remaining with this conjured weapon. (during combat only)

Conjure Frost Charges - Skill uses remaining with this conjured weapon. (during combat only)

Water Arrow - Shoot an arrow of water that damages foes and heals allies around the area of impact. Gain a stack of Water Arrow each time you strike an enemy.

The Flame Legion is far from trusted. I knew it at the legion rally, but here in human lands... We have a long way to go.

Are you in town for diplomacy?

After Bangar and the civil war...everyone is on edge. But thanks to you, our legion had the chance to prove ourselves. Now, I'm extending a hand in peace.

How do you feel about the Flame Legion's depiction here?

Some among us would see it as an honor to be immortalized this way. My hope is that these activities don't fan the embers of old grudges.

During Escort legion forces to the mine
We're ready to advance on the Petraj Overlook. Just give the word, Commander.

I need some more time.