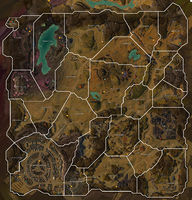 Map of Fields of Ruin

Until recently, the Fields of Ruin were the scene of the ongoing struggle between humans and charr, centering on the siege of the human city of Ebonhawke. Now a fragile truce exists between the two races, while radical elements on both sides seek to shatter that peace.

The Fields of Ruin lies in southeastern Ascalon, along the eastern wall of Tyria. It is primarily a large plain dominated by Ebonhawke, a human city on the southwest edge. It lies to the south of the Blazeridge Steppes, bordering the southern Blazeridge Mountains, and is one of the two main invasion points of the ogres from the east. Separatist humans and Renegade charr (who ironically agree that their governments are both wrong about peace and that they should keep killing each other) are focused in the center, around the peace delegations.

Grapes (node farm) - in the southwest corner of Wildlin Narrows