Welcome to Paradise is a tale written by Scott McGough. 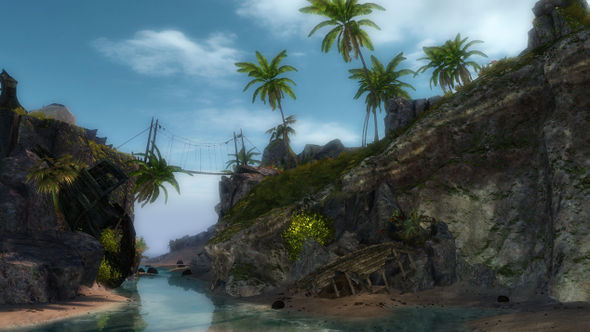 The ship's gangplank descended and Inspector Ellen Kiel girded herself to greet the new arrivals. The word from on high was to keep all visitors to Southsun Cove as alive and intact as possible, and Captain Magnus was counting on her to deliver. Magnus navigated the dangerous waters of Captain's Council politics on behalf of the entire Lionguard. The least Kiel could do to support him was play hostess to the clueless rich folk bamboozled by Consortium promises of fun in the sun.

At least it was a small group. A few charr and a handful of norn, each probably bound for careers as "facilitators" or "troubleshooters" or whatever the Consortium was calling its hired goons these days.

One of the charr showed her the Consortium insignia on his armor and grinned. "We work here," he said.

Kiel swore to herself. She should have recognized at least some of the group, but between the refugees and the Consortium hires (who were sometimes one and the same), there were too many new faces to track. Kiel prepared to slip away just as one last passenger emerged to disembark.

She was a striking blonde woman in a gold ensemble that struck Kiel as somehow indecent and elegant at the same time. The woman was clearly cultured, maybe even nobility: perfect poise, a graceful lilt to her step, her expression composed and serene. Her eyes were anxious, however, and Kiel recognized the look of someone preoccupied with a serious problem. 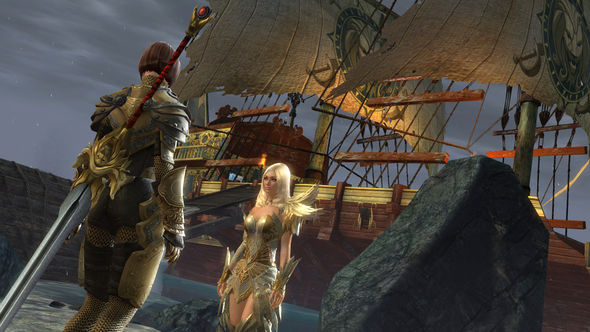 Intrigued, Kiel stepped forward and said, "Welcome to Southsun Cove, my lady. Have you been to our island before?"

The blonde noble's eyes widened, and then lost all traces of nervousness. "Thank you so much," she said, and her voice was every bit as refined and engaging as the rest of her. "This is actually my first visit." She extended her hand. "Lady Kasmeer Meade. Please, call me Kasmeer."

"Inspector Kiel of the Lionguard." Kiel took the elegant hand and shook it. Lady Kasmeer's grip was firm. Her nails were perfectly manicured and her skin well cared for, but it was not the hand of someone who had never done a hard day's work.

One of the ship's portholes opened near the bow and a wiry man in fine clothes clumsily forced himself through. Stowaway, Kiel thought. Kiel released Kasmeer's hand and watched the man's awkward progress through the tiny opening. When his hips cleared the porthole, he let out a soft yelp, and then made a large splash in the ocean below.

Eventually, the stowaway's hand clamped onto the dock edge and he hauled himself up. His brown hair was plastered to his skull and his expensive suit was soaked clean through. Dripping and shivering, he rolled over onto his back and wheezed, sucking in air and coughing out misty clouds of sea water.

Lady Kasmeer glanced over toward the dock. Mild annoyance wrinkled her perfect features.

"Excuse me, my lady." Kiel nodded toward the man and cracked her knuckles eagerly. "I have to go toss someone into the brig."

"There's no need for that," Kasmeer said. "He's an old friend. I'm trying to avoid old friends on this trip, but believe me: he's no threat."

"But he is a stowaway. And he's on my island, which makes him my problem."

"I'll vouch for him. Not happily, but...if he creates any trouble while he's here, I'll answer for it." 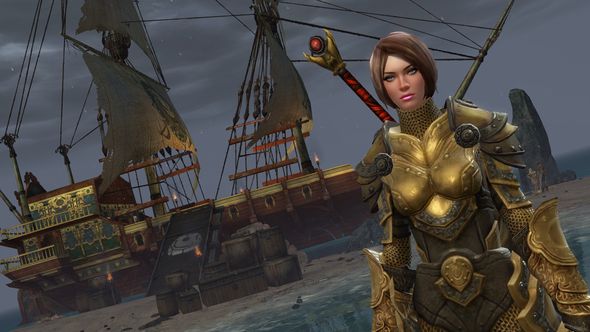 Kiel paused, noting Kasmeer's gentle determination. The noble woman wasn't scared of the man, but she wasn't exactly happy to see him. "Want me to delay him?" Kiel said. "That would at least give you a chance to get clear."

"No, thank you," Kasmeer said. "But if you could steer me toward the resort on Pearl Islet, I'd be extremely grateful."

"I'll do better than that," Kiel said. "I'm scheduled to patrol of the island anyway. I'd be happy to serve as your tour guide and bodyguard until you reach the resort. Though that would mean leaving your friend to fend for himself."

"He made it this far alone." Kasmeer's tone was light and unconcerned, but her eyes were sharp. "But you said 'bodyguard.' Is the island that dangerous?"

"I'm afraid so. The local wildlife tends to lash out. The local residents aren't much better."

"Even at the resort?"

"Let's just say you should be safe inside the walls, my lady. Just don't go out on the beach alone."

"Please: Kasmeer. And thanks for the advice. I work for a private investigator in Divinity's Reach, and I'm meeting a few potential clients for dinner on Pearl Islet. I don't imagine they'll serve us outdoors." She smiled a warm, dazzling smile. "Not at the prices they quoted me, anyway."

The stowaway grunted as he forced himself to sit up on the dock. He squeezed the sleeve of his silk jacket and returned sea water to its home.

"Seriously," Kiel's eyes darted over to the man. "If he's is part of any problems you have, tell me. I'm the chief problem-solver around here." 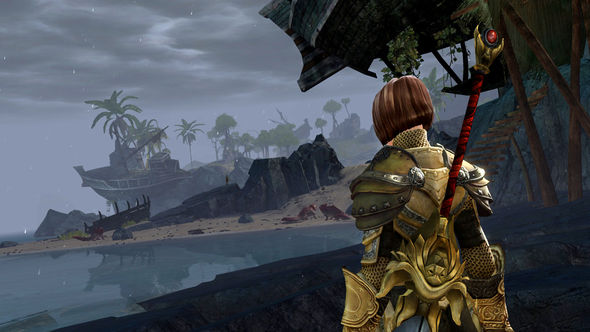 "You're very kind," Kasmeer said. "But Lord Faren is one of the few nobles in DR who isn't a problem. He comes with his own set of challenges, but at least he doesn't—" Kasmeer caught herself, and then briefly smiled again. "He doesn't judge people for circumstances beyond their control."

"A rare bird, then," Kiel said. "The world needs more people like that."

"I quite agree. But right now, if you please: I'm eager to see this island of yours."

"I will get you to the resort. After that, if you need help at any time, for any reason, call the nearest Lionguard and ask for me."

"I shall, rest assured," Kasmeer said, smiling her brilliant smile. "Southsun Cove may be more troubled than advertised, but I feel quite safe with its chief problem-solver on my side."

In the distance, Kiel heard the shriek of a karka and the roar of a reef drake. She imagined them tearing into one another, and anyone else within striking distance. She pictured Consortium troubleshooters squaring off against unruly residents. She considered the sharks in the water, the reef riders in the hills, and the treacherous riptides that had pulled careless bathers deep out to sea. She wondered if people like Kasmeer would ever be safe here, no matter who was on their side.

"This way, my—" Kiel stopped herself in time and said, "Kasmeer. I know you'll have a memorable stay. Now let's get you safely to your accommodations, and then safely home again."

People like Kasmeer would be safe here, Kiel told herself. They had to be. It was her job to make them safe, and Captain Magnus was counting on her.