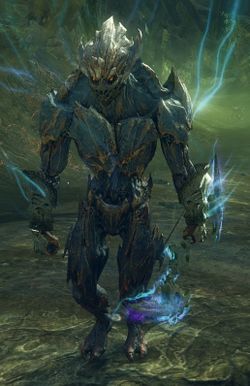 Mordrem are the nightmarish minions of the jungle dragon, Mordremoth. These plantlike horrors are fanatically devoted to Mordremoth, twisted by its influence over the domain of the mind, and more than willing to call on the dragon's power in order to better serve it in battle.

The Mordrem (sometimes prefixed Overgrown or Blighted) are the corrupted plant-like minions of Mordremoth, the Elder Dragon of Plant and Mind. They are based in the Heart of Maguuma but have spread eastward to Central Tyria, appearing as far as Iron Marches in Ascalon.

Raises the stakes to a whole new level of awful, doesn't it?

The appearance and shape of the Mordrem vary, but all of them have traits commonly associated with flora, being composed of corrupted plant matter. When they appear, a growth of small vines and other vegetation can be seen on the ground as they rise. They can take various shapes, such as Mordrem Wolves appearing beast-like and the Mordrem Shield Blossoms as plant-like. The process of Mordremoth's corruption remained unclear at first such as whether the creatures were formed into new shapes from vegetation or if Mordremoth took animals and turned them into plant-like creations, but later evidence suggests that Mordremoth used both ways to create minions.[1]

Blighting Trees act as minion making factories. Many Mordrem are closer to clones, created by corrupting plant matter that is shaped into near perfect replicas of beings both living and dead that are used as base templates in the minion creation process. The original beings that the Mordrem are based on are placed in a Mordrem Pod (for the living) or a Blighting Pod (for the dead).

Explorer Amoxtli has denoted a similarity between the Mordrem and Mordremoth's vines, and the Nightmare Court's own influences.

Following its awakening, Mordremoth began extending its influence throughout the Heart of Maguuma and created several Mordrem to enact its will. The Mordrem first appeared in Central Tyria in Brisban Wildlands, where they opened a passage to Dry Top in 1327 AE. They then attacked the Town of Prosperity as they spread their influence across the Maguuma Wastes. They continued advancing along with Mordremoth's vines, appearing as far east as Iron Marches, and attacked Fort Salma in Kessex Hills and Fort Concordia in Timberline Falls in search of magical artifacts.

The Mordrem's most devastating attack took place in the Grove, however, where the Shadow of the Dragon led them in an attempt to kill the world leaders attending a summit there and to injure the Pale Tree in preparation for Mordremoth's plan to weaken the sylvari's mental protection.[2] Although the Mordrem were driven off, the Pale Tree was reduced to a weakened state and could only stay conscious for brief amounts of time.

The Mordrem continued their advance but faced resistance from the Pact which had mobilized and set up Camp Resolve in the Silverwastes. The dragon minions were successful in breaching the camp but were driven back by bombardment, and the Pact continued the offensive to force the Mordrem Vinewrath, which had been coordinating the Mordrem assault, to withdraw. By the time the Pact Commander's party defeated the Shadow of the Dragon, the Pact fleet launched and headed for the Heart of Maguuma to take the fight to Mordremoth before the Elder Dragon could gather enough magic to become more powerful.

The Pact fleet crashed in 1328 AE, however, when Mordrem vines ambushed them by extending and piercing several airships while Mordremoth's call affected many sylvari who turned against their companions and sabotaged the ships. Following the crash, the Mordrem continued harassing surviving Pact members and local jungle inhabitants alongside the turned sylvari who began calling themselves the Mordrem Guard. They killed opposition and transported living captives and corpses to Blighting Trees to be cloned. Mordrem reacted to the reactivation of Tarir, the Forgotten City, and attempted to breach the city to gain the magic and Glint's Egg that resided within. Mordremoth created special Mordrem Vineteeth to kill Tarir's Exalted defenders whom it was unable to corrupt.[3]

During the Pact's regrouping and offensive in the jungle, Mordremoth refined its blighting abilities by creating the first batch of improved Mordrem from the imprisoned Logan Thackeray and Zojja who were kept alive as templates within Mordrem Pods. The dragon had plans to do the same to Trahearne, leading an army of these improved Mordrem on a full-scale invasion of Central Tyria.[4] However, these Mordrem were ultimately slain before Mordremoth itself was slain by the combined efforts of the Pact Commander's party, Trahearne, and the rest of the Pact and their jungle allies.

Following Mordremoth's death and the lack of the dragon's voice to guide them, some of the Mordrem became unhinged.[5] They nevertheless continued terrorizing the Heart of Maguuma and remained a threat even if their numbers had diminished by 1329 AE.

The fate of the surviving Mordrem Guard and whether they stayed loyal to Mordremoth or not remained unknown except for one atoning sylvari who appeared in Labyrinthine Cliffs during the Festival of the Four Winds in 1331 AE. An Inquest cell headed by Overseer Kuda used a Mordrem test subject, known as Beyn, to gather data on its combat and synchronization abilities alongside other dragon minion simulacra in the Specimen Chamber of Rata Primus.

The sylvari are a purified form of Mordrem, born from the Pale Tree that was freed of Mordremoth's corruption by unknown means. Unlike Mordrem, they grow without taking over other living things. Because they are protected by the Pale Tree and the Dream of Dreams, the sylvari are immune to corruption by Elder Dragons, a fact which was taken advantage of by the Pact by forming all-sylvari units such as the Pale Reavers.[6][7][8][9] Any attempt to corrupt a sylvari results in the affected sylvari dying instead; however, there are ways to circumvent this protection if the affected sylvari willingly opens themselves to a dragon's corruption rather than being forced to undergo the process.[10]

However, the sylvari are so vulnerable to mental corruption by Mordremoth that mere proximity and the intensity of its voice masking itself as the sylvari's own thoughts or a false sensation of a Wyld Hunt or Dark Hunt can be enough to turn them to the dragon's side. Sylvari refer to this phenomenon as "The Call", and they must continually fight to keep from being subsumed.

The Mordrem Guard are a specific type of Mordrem. They are sylvari who have answered Mordremoth's call and succumbed to its influence during and after the Pact fleet's crash in 1328 AE.[11]