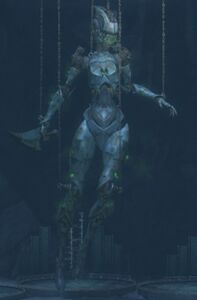 Your end is near. Are you afraid? My big, beautiful marionette is gonna break your heart.

The Twisted Marionette is a giant Twisted Watchwork super-weapon created by Scarlet Briar in 1327 AE. Its design was made in mockery of Queen Jennah's Watchknights and was held aloft by six chains suspended from The Breachmaker, still under construction. The super-weapon was tested openly at Marionette's Landing in Lornar's Pass. The Marionette was powered by five Power Regulators, each defended by five powerful Twisted Watchwork wardens. The eventual members of Dragon's Watch - Braham, Rox, Marjory Delaqua, Kasmeer Meade, and Taimi, fought with adventurers to overload the Power Regulators to sever the chains of the Marionette. When the fifth chain was destroyed, Scarlet Briar would retrieve the Marionette with the sixth and final chain, and later re-deploy it with all chains reattached. Upon being fully charged, the Twisted Marionette would fire a powerful energy beam into the Breachmaker, which would then target all adventurers in the area, instantly killing them.

Eventually destroyed by members of the Durmand Priory after the proto-Dragon's Watch crew left.[1] After its destruction, the Twisted Marionette's remains lie uselessly at the test site, abandoned by Scarlet Briar in her preparations to assault Lion's Arch, and remain covered with snow.

In 1334 AE, a vision of the Twisted Marionette, where it was successful in destroying Tyria's heroes, began to threaten to intrude into Tyria. A Mist Stranger appeared in the Eye of the North to recruit the Pact Commander and other allies to deal with the threat, guiding them to the vision through the Scrying Pool.[2]