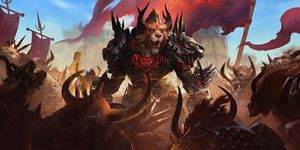 Bangar Ruinbringer, Imperator of the Blood Legion, addresses the High Legions during the All-Legion Rally in Grothmar Valley.

Imperators are the leaders of the High Legions, holding the second-highest rank in charr society (the highest being the Khan-Ur). Historically the imperators have always been descendants of the Khan-Ur or at least claimed to be such, and only a charr calling themselves the Khan-Ur's descendant could claim the title of imperator.[1] As there is currently no Khan-Ur, the imperators are the highest ranking charr and have the supreme authority within their legion's structure, acting as commanders-in-chief.[2] As hinted by Seneca the Relentless, imperators are granted the right to personally interrogate, judge and sentence prisoners.

The first imperators were the four officially recognized cubs and heirs of the Khan-Ur who acted as his generals during the human-charr conflict. When the Khan-Ur was assassinated by an unknown force while planning a counterattack against humans, the four imperators of the High Legions blamed one another for his sudden death. They fought the War of Succession and ultimately divided the charr empire in their futile attempts to claim the title of Khan-Ur and regain control of all the charr legions. These High Legions became known as the Ash Legion, Blood Legion, Flame Legion, and Iron Legion, while each imperator ruled their respective autonomous region. The division among the charr allowed the humans to push them back and secure Ascalon for themselves for centuries.[1][3]

According to some disputed sources, the primus warband of any of the High Legions would have historically carried the name of that legion—Ash, Blood, Flame, and Iron—as seen with e.g. Iron Imperator Forge Ironstrike.[1] However, if this tradition ever truly existed among the charr, the naming of the imperators and their primus warbands became less strict during the reign of Iron Imperator Singe Seigemourn—who had no reference to Iron in his name—in the 13th century AE at the latest. Historically the leader of the primus warband had to claim the name through blood challenge—a fight between descendants of the Khan-Ur, or those claiming to be descendants, for supremacy within the legion.[1]

Occasionally, non-descendants of the Khan-Ur joined the primus warband and took the name of their leader as their own as was charr tradition. However, the leader of the primus warband was always viewed as a descendant of the Khan-Ur, the foremost heir of the legion and their rightful inheritor of the crown of leadership among the charr. The officially recognized imperators would always claim to be descended from the Khan-Ur, tracing their lineage back to one of his known cubs. Other heirs have historically been suspected, however, and occasionally a smaller bloodline surfaces with claim—but none have made a successful bid.[1]

At the start of Guild Wars 2[edit]