Shadow of the Dragon

Shadow of the Dragon

While some believe it is immortal and cannot die, others do not. To date, there is no proof in either direction.

— A Treatise on the Shadow of the Dragon

The Shadow of the Dragon is the form taken by the shadow of evil that has infected the Dream of Dreams. If the player character is a sylvari, it blocks the path to their awakening and must be vanquished before the player can enter the world. Physically, it resembles a dragon champion and seems to be composed of plant matter, with an orange glow at its core not dissimilar to that of the Summoned Husks.

Although Caithe attributes its presence to the Nightmare Court, the Pale Tree believes it to be a manifestation of the player's Wyld Hunt to defeat Zhaitan.

In early 1325 AE, the Shadow of the Dragon attacked the jungle of the Dream of Dreams alongside an army of the Nightmare Court's hounds, some suffering from more sinister influences, all aspects of the Shadow's poison. When a sylvari Dreamer, aided by Caithe, a sylvari hero, organised to drive off the beast, the Shadow of the Dragon exhaled poison at a plant bridge that would allow the group to fight back against it, collapsing it. Shortly after, it was repaired by Alboris, a fellow Dreamer, and the group charged the swarm of nightmare hounds defending the creature.

Destroying the nightmare hounds, the Shadow took notice and erupted from the ground, and was eventually driven off by the protectors of the Dream. When asked about it, Caithe explained that it was an aspect of the Nightmare Court's poison. However, the Pale Tree declared that it represented an Elder Dragon, namely Zhaitan, and also stated that Caithe's dream had been similar. 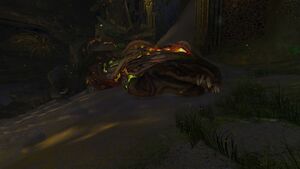 The Shadow of the Dragon lying on the ground injured in the Sealed Cavern.

In 1327 AE, a year after Zhaitan's death, the Elder Dragon of Plant and Mind, Mordremoth, awoke with the aid of the crazed sylvari secondborn named Ceara. Mordremoth attacked several locations around Tyria and the Dreamer who had slain the Shadow's avatar in the Dream, now the Commander of the Pact, called a summit with several major world leaders hosted by the Pale Tree within the Grove. During this summit, the Shadow of the Dragon attacked the Grove alongside a number of Mordrem, including draconic tendrils that empowered it. It was then revealed to be a champion of Mordremoth and dealt near-fatal wounds to the Pale Tree. Though it was driven off, the wounds it dealt to the Pale Tree lasted for at least 5 years.

Around this period of time, a treatise on the Shadow of the Dragon was written by Scholar Caterin of the Durmand Priory, noting that while several sylvari had declared to have seen it in their Dream, only the Commander's testimony of its appearance had any validity and that all other accounts were likely hoaxes. It was also mentioned to exist within both the Dream and the physical world.

Later that year, while tracking down Caithe and Glint's Egg, the Pact Commander encountered the Shadow after reliving Caithe's memories of Wynne's death. While battling the beast, it summoned creatures of shadow to snuff out divine fire, along with shadowy tendrils resembling the ones it had summoned while attacking the Pale Tree. After a fierce struggle, the dragon champion attempted to flee the cavern where the battle took place and was finished off for good by the Pact Commander. However, its interference prevented the Commander from reaching the Pact fleet in time, and the fleet was destroyed and the Pact devastated.