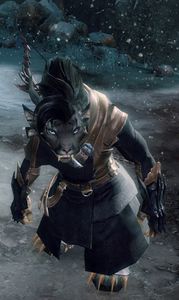 When Swordshadow comes for you, may she leave you alive.

Malice Swordshadow is the imperator of the Ash Legion. She and Imperator Smodur the Unflinching have been the two primary forces on the charr's side working for the peace treaty with humanity. Although she is younger than her fellow imperators, Malice is known for her cunning and intelligence, and she has gained a reputation for being a dangerous opponent.[1][2]

Despite her youth, Malice Swordshadow eventually became the most recent imperator of the Ash Legion. She proved herself to be a cunning leader who used her agents to keep up to date on matters concerning Ascalon and beyond. The Iron Legion's Imperator Smodur the Unflinching was aware that Malice had sent her troops to not only assist him against the Ascalonian ghosts and the Flame Legion but to spy on the Iron Legion as well; despite this, the two imperators respected one another.[3]

After learning that General Almorra Soulkeeper had left the Blood Legion and founded the Vigil as a direct response to the threat posed by Kralkatorrik and other Elder Dragons in 1320 AE, Malice ordered her trusted agent Ember Doomforge, Almorra's grandcub, to infiltrate the order under the pretense of remitting Ember from the legion to boost the Vigil's numbers. However, the three female charr all knew the real reason Ember was in the Vigil: to report to Malice on the Vigil's activities. Almorra accepted Ember into the order without issue despite knowing Ember's true allegiance; it is suggested that the general eventually learned that Malice was secretly supportive of the faction among the charr who were working for a truce with humanity so they could free more of their forces to fight the Elder Dragons, a goal which Almorra herself was after.[4]

In 1324 AE, Malice continued supporting the truce faction among the charr albeit behind the scenes as she did not want to risk opposition from the other High Legions who were adamant that no truce would be signed until the Legions' most prized possession, the Claw of the Khan-Ur, was returned from the ruins of fallen Ascalon City which was infested with murderous ghosts.

Malice and Almorra eventually hatched a plan and had the charr truce faction contact Queen Jennah's representatives discreetly for an offer to consider a ceasefire with humanity in exchange for the Claw. A band representing both nations' interests was formed, including Ember Doomforge, Dougal Keane, Gullik Oddsson, Killeen, Kranxx, and Riona Grady. The group eventually managed to retrieve the Claw from the haunted ruins of Ascalon despite losing some members and facing an act of betrayal from one of their own in the effort. Within a week of meeting Dougal's group who refused to let him know about their mission in Ascalon, Blood Legion Tribune Rytlock Brimstone dined with Malice and asked her in person what the group had been up to although he already had his suspicions after letting them continue their trek unhindered.[5]

After the Claw had been secured, it was handed over to Smodur, who was the representing charr imperator in Ascalon, with the blessing of both Queen Jennah and Duke Wade Samuelsson of Ebonhawke. The Ebonhawke Cease-Fire Agreement and the Charr Legions Cease-Fire Agreement were signed not long after, allowing both humans and charr to pull back forces in order to assist their respective nations on other fronts that desperately needed reinforcements and supplies, particularly against the encroaching threat of the Elder Dragons as both Almorra and Malice had wanted.

Following Kralkatorrik's death in 1332 AE, Blood Legion Imperator Bangar Ruinbringer sent invitations to his fellow imperators as well as notable heroes such as Almorra and the Pact Commander to attend a rally meant for all the four High Legions, including an atoning Flame Legion splinter group led by Efram Greetsglory, in Grothmar Valley. Malice attended the opening ceremony in person with her legion being seated next to Efram's Flame Legion and watched as Bangar's Centurion Ryland Steelcatcher had a ritualistic fight against a captured Branded devourer at the Festival Promenade.

The event took an unexpected turn when a larger Branded broodmother and its minions invaded the arena upon the other devourer's death, forcing everyone present to defend themselves. Aurene, the Pact Commander's dragon ally who had replaced Kralkatorrik as an Elder Dragon, ended the fight by flying over the battlefield and Branding the broodmother, and created a crystal formation at the center of the arena much to everyone's surprise. The sight of Aurene rattled the charr, making many of them worried whether she could be trusted and if the Commander could keep her in line. Some charr, including Bangar, even believed that the Commander had used Aurene to flaunt their strength.

The Commander approached the imperators afterwards to assure them that Aurene was not threatening the charr. By the time the Commander entered Malice's camp, Marjory Delaqua was already having a conversation with the Ash Imperator about the Ash Legion's modest display at the celebration when compared to the other legions who had bigger camps. Malice tried to deflect the detective's questions by directing her attention to other topics, which Marjory took note of. During the ensuing conversation with the Commander, Malice revealed that she already knew what the Commander was attempting to do and warned them about Bangar and Smodur's ambitions to become the next Khan-Ur now that most of the threats to the charr were no longer dividing their attention. The imperator also expressed concern over Aurene's motivations, the Flame Legion's presence in the region as well as a resurgence of both Renegade and Separatist activity. She suggested that the Commander keep an ear out for unusual activity during the festivities in case some troublemakers decided to show up to disturb the peace.

Unbeknownst to most people, Malice's visible camp was only a decoy while the real Ash Legion base of operations was hidden in the secluded Recon Cove underneath the Shattered Steppes. The Ash Imperator had instructed Sorex Ripshadow to monitor the valley for any Renegade activity and to keep an eye out for troubling developments among the other legions with Iovis Nearspecter's listening devices.[6] When the Blood Legion officer Ferox Keenaxe found one of the listening devices in his office and brought it to Malice, the imperator swore that she did not know anything about such devices although Ferox suspected that she knew more than she was letting on.[7] By the time Marjory found her way into Recon Cove, Malice allowed her to stay and observe the operation.[8]

Malice soon learned that Bangar and Ryland had rallied several dozen armed warbands across all legions, including the Renegades, and slipped from the Blood Keep into Shiverpeaks Pass under the cover of the festivities. Marjory approached her, Efram and Smodur and asked them to follow her so they could meet with the Commander and discuss Bangar's actions. They and Braham Eirsson eventually found the Commander, Rytlock and Blood Legion Tribune Crecia Stoneglow at the mountains as the worsening blizzard had prevented the trio from following Bangar deeper into the Far Shiverpeaks.

During the conversation the party figured out that Bangar viewed Aurene as a threat and was seeking to subjugate the Elder Dragon Jormag with Braham's stolen, fire-enchanted bow so the charr could have a counter for Aurene. Malice realized that the treaty-opposing Renegades, who had been poaching impressionable charr from all legions over the years, may have been working for Bangar all along. The Ash Imperator was determined to investigate how long Bangar and the Renegades had been collaborating, how far-reaching the Blood Imperator's plans were, and root out any of his planted sleeper agents and saboteurs from the legions' ranks.

Malice also warned the Commander not to trust Smodur either as she was fully aware of the rivalry and ambitions between the two imperators and how the politically savvy Iron Imperator had been taking advantage of power vacuums before. The Ash Imperator also expressed hope that Crecia would make the right calls regarding Bangar's rogue actions.

[Group Event] Escort legion forces to the mine (80)

At Legions' Alcove
You're quite adept at sabotage. I'm sure you'll be especially useful up here.

Any news from your agents?

Any actionable intelligence gets broadcast to the field. New targets are being identified all the time, as you know.

And I'll make quick work of them.

I appreciate it, Imperator.