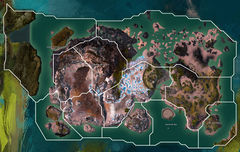 Southsun Cove is an island located southwest of Lion's Arch, in the Sea of Sorrows. Sometime after the defeat of Zhaitan, the Consortium representative Canach sent an expedition to survey the island and build an asura gate, as part of the Consortium's development plans for making it a tourist attraction. The team used loopholes in their orders to study the flora of the island, and in turn provoked the native karka, who had settled the island recently when fleeing the horrors of the Unending Ocean. The karka followed the survivors of the team and attacked Lion's Arch, Garenhoff and the Caledon Forest. In response, the Lionguard led a counterattack to wrest control of the island, building roads, siege weapons and outposts along the way. Finally, the Lionguard took down the Ancient Karka, and the island was secured.

With the death of the Ancient Karka, the Consortium continued working to turn the island into a research and tourist attraction. Consortium representatives are working to provide homes for refugees from the events of Flame and Frost, who are preparing to travel to Southsun Cove to make new homes there. 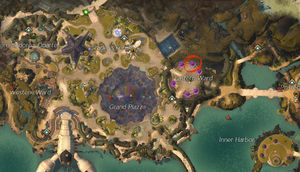 Location of the Lion's Arch Asura Gate to Southsun Cove

In Southsun Cove there are Southsun Economists that sell unique gear, available only when all four settlements of the Island Control meta event are captured by settlers.

During The Lost Shores

During The Secret of Southsun

Bug:
Some background sound effects are not muted completely while Guild Wars 2 is in the background even while using the related sound option.