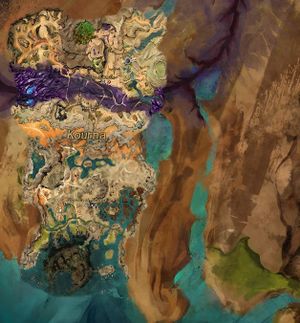 Kourna is the southernmost region of the Elonian mainland. As it was known, the region/province had many garrisons and the strongest military presence in Elona. Elonian centaurs claimed the land as their home for centuries, but today their fate is unknown. The region's inhabitants found food in the region's abundant savannahs mostly through herding. Though farming was possible, it required the damming and redirection of the Elon River, which once flowed through the land into the Unending Ocean as the land's main water supply. With the Elon again diverted north after Palawa Joko's return to power, the region fell under famine and only gets water when he allows it.

The World of Tyria
Retrieved from "https://wiki.guildwars2.com/index.php?title=Kourna_(region)&oldid=2189444"
Categories: