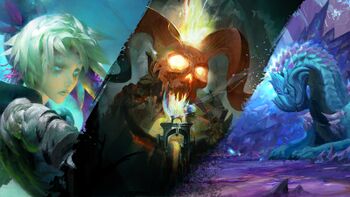 The Living World in Guild Wars 2 is the series of story and content releases that serve as the ongoing storyline between expansions, detailing the effects of the previous expansion and leading into the next. Episodic releases of Living World are grouped into seasons, with each episode bringing new story missions and other features, including playable zones, masteries, equipment, achievements etc.

Each Living World episode is free for all players who logged into a character during its initial release window. Afterwards every episode becomes a permanent addition to the game and can be purchased and replayed at any time, except for the first season which is free for everyone permanently.

The Living World episodes are grouped into seasons. This is their list relative to the core game and required expansions in story order, each with summaries of the storylines: 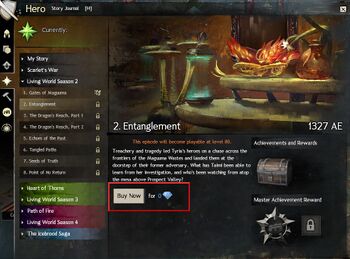 Episodes of the Living World must be unlocked in order to play them. Unlocked episodes can be accessed by any level 80 character on the account; with the exception of Season 1 and Season 2, however, they require expansions to be played. There are three methods for unlocking episodes: