Guild Wars is the first series of games produced by ArenaNet. There are a total of three campaigns and one expansion, as well as a DLC pack of bonus missions:

The name of the series comes from the Guild Wars, a series of conflicts between Tyrian guilds which led to decline of humanity and allowing the charr to invade Ascalon, and other events of the first series of the games. 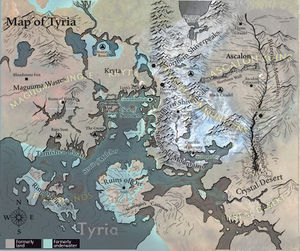 Overlay map of Guild Wars and the novels' maps showing the differences.