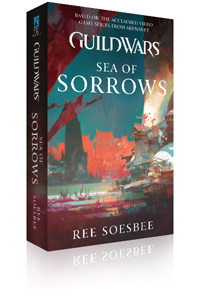 Sea of Sorrows, written by Ree Soesbee, is the third and final novel to bridge the time between the original game series and Guild Wars 2. The plot focuses on Zhaitan's awakening and its effects on Tyria, including the flooding of Lion's Arch.[1] It begins with the sinking of Lion's Arch while the main character is on a ship heading to Arah, and follows the main character as he meets other races and helps rebuild Lion's Arch for all races.[2] The book contains clues to help players find the location of twelve plaques honoring the history of Lion's Arch and its founder Cobiah Marriner.

The lost kingdom of Orr lies beneath the ocean waves, an entire civilization swallowed by an ancient cataclysm. For centuries, the depths have lain dormant, those ancient secrets lost. Until now. The Elder Dragon Zhaitan has risen. In its wake, the drowned kingdom of Orr is reborn—and another destroyed. The city of Lion's Arch, for generations a cornerstone of civilization in Tyria, is brutally swept beneath the waves, leaving nothing but ruins.
Among the survivors is Cobiah Marriner, a human sailor shipwrecked by the tsunami and stranded at sea. When he is rescued by a ferocious charr, Cobiah knows that he's been plunged into a world forever changed. Now, Zhaitan's undead servants dominate the sea, destroying port after port and slaughtering anything in their path. In the midst of ruin, Cobiah vows to see Lion's Arch rebuilt. Amid the storm of the dragon's rising, Cobiah must become a hero to his crew and an admiral to the pirate fleet, and face the ghosts of his past. Only then will he master the Sea of Sorrows and crush the armada of Orr.

Section-stub. This key section of the article is incomplete. You can help the Guild Wars 2 Wiki by expanding it.
Reason: Add plot synopsis.

The book was released on June 25th, 2013 in North America and Europe, together with an ingame scavenger hunt.

Each chapter of the book starts with a verse of "Weather the Storm", a sea shanty written especially for the book. The whole song can be found at the end of the book.

You don't know a storm 'til you ride the wind Beneath cold and blackened skies, O 'Til you're sailing through a thunderhead With the lightning in your eyes Death, he laughs in the sails and the jags And the bloody sun won't rise, O.

A sailor's life's filled with toil and strife The sea's both boon and bane, O We're Kryta bound on a northern tide Through the lightning and the rain We'll sail through all these stormy nights 'Til we're safe at home again, O.

Open sea, and we're homeward bound Fair or foul the weather, O The cap'n swears we'll make our port Though the sun's burned to an ember If the Dread Ships come and the darkness falls Then we'll all go down together, O.

She's a restless sloop with a six-armed maid A-dancing on her prow, O Her brassy cannons crease the sea But the weather's chased her down Her compass spins, and her captain screams And the crew's all dead and drown'd, O

The sails are rent, and the engine's blown The keel is split to stern, O We lost the rudder to the tide And the mizzenmast is burning The rain's like nails, and our harbor's lost And the compass spins and turns, O.

Now the darkness comes, and the stars above Circle 'round like sharks at sea, O Instead of fighting for our lives We should be sitting at our ease But I chose the strife of a sailor's life And the ocean, she chose me, O.

The wind, it howled, and the thunder boomed Thought the storm might just prevail, O But we shouldered on 'til the break of day And we tamed that fearsome gale Held to courage and to honor And we lived to tell the tale, O.

No, you don't know a storm 'til you ride the wind Beneath the cold and blackened skies, O 'Til you're sailing through a thunderhead With the lightning in your eyes Death, he laughs in the sails and the jags And the bloody sun won't rise, O.