The following is a list of official Guild Wars 2 merchandise.

Three novels, as well as the anniversary artbook, are available for purchase from various book retailers, including Amazon. 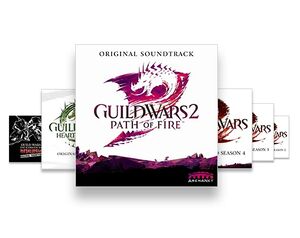 The soundtrack is available as digital downloads from iTunes and Amazon. The physical 4-CD version is no longer sold.

The original scores for Guild Wars 2: Heart of Thorns, Guild Wars 2: Path of Fire, Living World Seasons 2-4 and the Icebrood Saga can be also streamed on several sites, including Spotify, Tidal, and SoundCloud.

For Fans By Fans (formerly welovefine) offers a variety of official merchandise including clothes, bags, accessories and art prints. They use both designs submitted by players, as well as official designs from Guild Wars 2 artists.

We’re partnering with EMP to offer official Guild Wars 2 T-shirts in Europe! EMP has been selling exclusive merchandise products and collections for fans from the worlds of gaming, music and entertainment for 35 years.

EMP, based in Europe, offers variety of exclusive t-shirts. 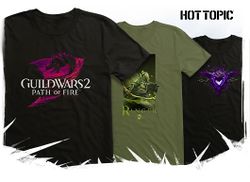 Hot Topic and ArenaNet have teamed up! Hot Topic is known for their passion for music and pop culture and they’ve created a line of Guild Wars 2 licensed apparel, now available through their online store. 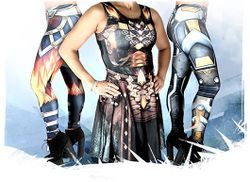 Wild Bangarang and ArenaNet teamed up to design fashionable, functional looks straight from Tyria! Recognized Internationally for their geek & gamer clothing collections, Wild Bangarang has created Guild Wars 2 cosplay-ready character apparel for you to expand your fantasy wardrobe with. 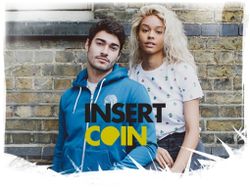 ArenaNet has teamed up with UK-based Insert Coin to create an official collection of exclusive Guild Wars 2 gear! Insert Coin is well known for developing unique, creative, high-quality apparel and accessories, and they've made it their mission to help players around the globe bring their love of Tyria into the real world.

Choose from medium or large mouse mats and lite or tough phone cases—plus you have the option to customize both with your name or other text! 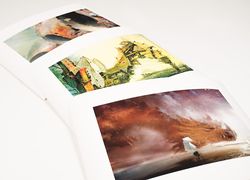 iam8bit sells vinyl versions of the Heart of Thorns soundtrack and the Path of Fire soundtrack. Previously, they used to sell a variety of official merchandise including clothes and posters. Some of the discontinued merchandise can be seen here.

In January of 2020, you’ll be able to surround yourself with some adorable friends (or enemies)—Funko Pop! featuring Aurene, Rytlock, and Palawa Joko! Each one will also include a code for a special Funko Pop! mini version to accompany you in game.

Funko Pop figurines of Aurene, Rytlock and Palawa Joko were released in January, 2020. A code for in-game miniature is included with each corresponding figurine: Mini Baby Aurene Funko POP!, Mini Rytlock Funko POP! or Mini Joko Funko POP!. They are produced by Funko, but are available from other sellers, including Amazon and Hot Topic.