This article is about the microtransaction currency gems. For the crafting material, see Gemstone.

Purchased and spent via the Black Lion Trading Company. 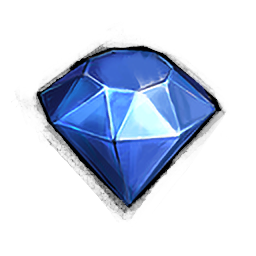 Gems are the in-game currency required to make purchases from the Gem Store. The amount of gems you hold is indicated in the wallet and upper left of the Gem Store. Gems may be spent on convenience or cosmetic items, or account services.

Gems can be acquired by spending real-world money or from within the game for no additional cost to the player:

Gems can be purchased for real-world money in various fixed amounts; there is no discount for bulk purchases. Prices in euros (€) and pounds sterling (£) include the 20% VAT; prices in dollars ($) do not include sales tax, since the amount varies depending on several factors. 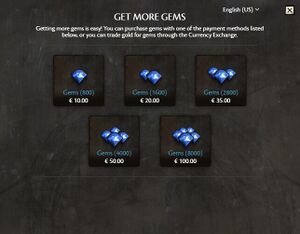 Gems are available in the following amounts via the in-game interface:

Various retailers offer gem cards that can be redeemed in-game for 1200, 2000 and/or 4000 gems, depending on the retailer.

These vendors have offered gem cards for extended periods of time:

The table below shows the conversion rates between gems and three currencies accepted by ArenaNet:

1 Rounded to the nearest whole number.