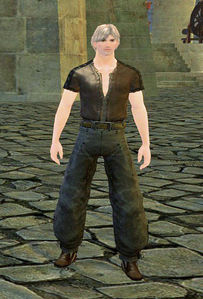 (This NPC's appearance may change randomly.)

Citizens are generic NPCs of the five playable races found throughout Tyria, mainly within cities and large settlements.

Section-stub. This key section of the article is incomplete. You can help the Guild Wars 2 Wiki by expanding it.
Reason: Missing locations

For previous dialogue: Citizen/dialogue
Female human near Grenth Low Road
Divinity's Reach really is dangerous. I never knew shopping could be such a harrowing experience! I saw a real bandit. The Seraph were chasing him through the streets.

Male human near Dwayna Low Road
You know, I was mad when he first came home with that practice sword. But he never backed down, insisting that he had to start training so he could be a good Seraph. It made me proud.

Male human near Rurikton Waypoint
Can you believe that charr who came through here before? Talk about rude. When you're in someone else's home, you respect their rules. I hope he wanders into te wrong alley.

At the Plaza of Dwayna or Uzolan's Mechanical Orchestra
Why can't people see what Minister Caudecus is doing? Look at all of this! This isn't the time to be throwing a party, not with so many threats to our safety.

At the Plaza of Lyssa
Answers come to those who seek, just not always in the form we expect.

Inside the Maiden's Whisper
I wish more people had faith in the queen. Sure, she's as human as the rest of us, and none of us are without our flaws. But she's a great woman, and she's done so much for us.

You are clearly a loyal subject.

At Uzolan's Mechanical Orchestra
I don't know how to talk to sylvari. Every time I think they're similar to humans, they prove how different they are. Think about it! Like their hair—do you think they prune it?

What are you looking at?

These windows are mesmerizing. I heard that one of our past kings had this walkway commissioned from the asura. I don't understand how it works, but it's incredible.

That it is. Good-bye.

Well, I'll be seeing you.

In the middle of Ascalon Settlement
Is there something I can do for you?

I've been told you witnessed one of Scarlet's first invasions. I'm hoping you know something that can help us stop her from doing this to anyone else.

I overheard one of her sky pirate thugs says they couldn't wait to pillage Frostgorge Sound and...Fireheart Rise, that was it.

Thank you. You've been very helpful.

Emissary Vorp: Before I can get you in, I need more data from several attack sites. This is where it gets a bit complicated.

In Dryground Village
We're gathering here for our offensive against the undead. Have you come to join us? The wardens could use all the help they can get.
(if not sylvari)

Wardens are trained to defend. You might call them soldiers, but they're different. They don't fight out of obedience or ambition, but rather because they truly love our world.

Glad they're getting some stage time here, then.

Whatever's cooking back there in the kitchen smells amazing. I've heard their chef is the best in the city.

Female human
I keep my faith in the Six, and I do my best to live my life well. So why do they never seem to have answers when all I have is questions? Do they want me to find answers myself?

Maybe so. It's hard to say.

Male human
Even the smallest of blessings is still a blessing, something we should be thankful for. In this day and age, with centaurs knocking down our gates, it's hard to remember that.

I know what you mean.

Female humans
It's hard to imagine what life must have been like in the past, to have seen the majesty of Ascalon City, Rin, or the old Lion's Arch. The only great city we have left is Divinity's Reach.

The number of orphans coming in from the surrounding areas keeps increasing. Poor things. Most lost their parents to a centaur attack. Can you imagine?

Male humans
The other day I went down to Farmer Eda's orchard. You know how sometimes you just get in the mood for something? I was really in the mood for an apple. Guess what happened.

I go to the tree, yeah? And this spider comes out. This GIANT spider! What's with that? I hate spiders! With all their legs, and just...ugh! I wonder how she manages to get any pies made at all!

She probably has good help.

Have you seen any of the cats here in Divinity's Reach? I'm trying to spot them all. Each one, I've got a name for them, and I also come up with stories of what their life is like.

Absolutely. Because people never really think about things like that much, do they? What life must be like as a cat? Or anyone other than themselves, really. That's my hobby, making up stories.

Female citizen
A good drink and some good gossip. There's no better way to end the day! Between the bandits and the centaurs out in Shaemoor, I need some down time.

Male citizens
Another round, another toast, in the good name of, and to the good health of, Minister Caudecus! May his sense of fun never die!

I can't believe the nerve of some people, disrespecting the good name of Queen Jennah. Part of me wants to take my bottle of ale and break some sense over their heads.

Greets
Ideas are like cream. Good ones rise to the top.
My ears! How are you?