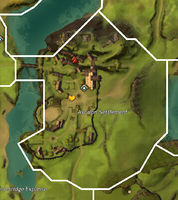 The Ascalon Settlement is a walled township within Gendarran Fields situated between two hills. It is populated by descendants of humans who fled from Ascalon in 1072 AE after the charr took over. While it is an old settlement, many of the residents still believe it's a temporary home in the hope they will one day return to Ascalon, and some residents that believe humanity are still the better race. The northern hill of the town holds ruins from an older Krytan settlement, as well as a memorial, Tomb of the Unknown Soldier, while the southern hill holds a graveyard. 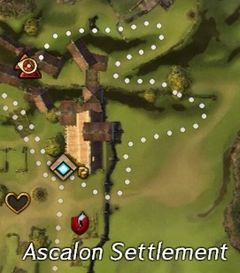 From Ascalon Settlement Waypoint, head east out the gate and follow the road north and its turn west up a hill. Head to the top of the hill towards the large tower, then face south and jump on the building with the vista. Not difficult if you follow the path (see image).

Drive back the hands of the accused thieves (29)

Seraph Soldier: Isn't Ascalon Settlement the place where people went to hide from the charr?
Villager (1): That's correct. The refugees came across the mountains and settled there.
Seraph Soldier: Times have changed, huh? Now, we're friendly with the charr, and it's the centaurs we hate.
Villager (2): As far as I know, we've always hated centaurs. And I'm still not sure about the charr.

Servant: Have you seen him? He's in a terrible state.
Servant Patrik: The parent isn't supposed to outlive the child.

Gertrude: It's time for self-pampering, m'girl. We'll be itching a ride on an eastbound caravan.
Myrna: We had fun at the hot spring, mm? Scared all those men away with our bathing suits.
Gertrude: We didn't have no bathing suits—only beautiful, god-given birthday suits.
Myrna: Worked out just fine for us.

Myrna: We should hire a strapping young man to take us up to the arena.
Gertrude: Ooh, I do love to watch the fights. Maybe next week.
Myrna: The guard's wife will have had her babe by then, and we'll have midwifing money to gamble.
Gertrude: That skinflint paid in chickens last time. Don't count on his gold, dearie. (laugh)

Myrna: You notice how dredge have a face only a mother could love?
Gertrude: Care, girl. Care with what you say. Th'gods got ears everywhere. I suspect they wouldn't like you disrespecting one of their creatures.
Myrna: Toenails and toadstools. I didn't see the gods rushing to snatch them outta slavery.
Gertrude: Nope. They did that all by theirselves.

Servant Patrik: I wonder what centaurs do with their prisoners.
Servant: I don't think we want to know.

Villager (1): Should we... go for a walk? Stretch our legs? Breathe some fresh air?
Villager (2): I think that's a marvelous idea. Have I mentioned how much I like being married?
Villager (1): You sure? You've only had three days of it. You're not tired of me yet?
Villager (2): I'll never tire of you. Even centaurs can't come between us. I'm yours forever.
Villager (1): Forget the fresh air. Let's go back inside.

Old Villager (1): Count it again. We've got to be close!
Old Villager (2): We are getting closer, but we have a long way to go before we can leave this doomed hole.

If Nebo Terrace is captured by centaurs
Rivark points at <Character name>.
Rivark: You there! News just in: Nebo Terrace is completely overrun. I hate to think what's happening to its citizens.

In the graveyard
Captain Greywind: The White Mantle, the Lionguard... They're peacocks who like pretty garb and puffing out their chests.
Greywind Guard: The Ascalon people, on the other hand, have always had to fight to protect their home.

Captain Greywind: Because this area is so dangerous, I've taken it upon myself to provide training to all Ascalonians.
Greywind Guard: You're a brave leader, Captain.
Captain Greywind: It's a beautiful land, but I remember the war too well.