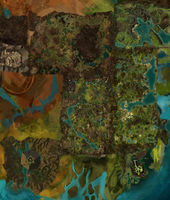 The Maguuma Jungle is an expansive area west of Kryta and Orr, and includes the Maguuma Wastes and Heart of Maguuma. The capital cities of the asura and sylvari (Rata Sum and The Grove respectively) are located within the southern area of the jungle, a region known as the Tarnished Coast. The Maguuma Jungle is also home to a number of other sentient races, including various tribes of centaurs, hylek, skritt, quaggan, and the Quetzal tengu.

In the past, the mystic druids lived in the Maguuma and became spirits to help guard the jungle and its inhabitants. The Maguuma Jungle is also the home of one of the bloodstones. Some time following the Rite of the Great Dwarf in 1078 AE, the Exalted left Kesho and took up residence deep within the jungle, preparing the city to eventually guard the second scion of Glint in secret.

This achievement consists of discovering all 167 areas within the Maguuma Jungle. Some commonly missed areas are as follows:

The World of Tyria
Retrieved from "https://wiki.guildwars2.com/index.php?title=Maguuma_Jungle&oldid=2579024"
Categories: