This article is about the area in Metrica Province. For the fractal, see Thaumanova Reactor Fractal. 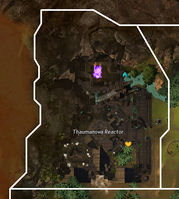 When the reactor blew, the world's fabric turned inside-out. Some things will never be the same.

The Thaumanova Reactor is a ruined asuran city[1] in northwest Metrica Province. It was destroyed recently in an Inquest experiment gone awry in their lab under the city, where they were studying chaos magic and, under pressure from Scarlet Briar, mixed in draconic energies they had inaccurately believed to be more chaos magic.[2][3][4] The resulting explosion tore the fabric of reality, an attribute of chaos magic, and created chaos rifts teleporting creatures from across Tyria of the surrounding areas.

Unintentionally, the experiment helped the Inquest and their consultant identify the network of magical channels that criss-cross the globe known as ley lines.[2] The complex itself was built on an intersection of these channels, causing the disaster. After the explosion, the energy source that the Inquest was experimenting on was moved to the Thaumacore Inquiry Center in the Toxal Bog, causing the chaos effect to spread northward. The effects of the underground experiment also affected other areas such as the Chaos Crystal Cavern in the Iron Marches.

The site of the disaster is considered extremely dangerous, as it is full of chaotic materials and waste, on top of the aforementioned creatures teleported in at random. Additionally, the disaster seems to have divided the area up into five distinct sections, four of which hold ties to the elements of fire, ice, water, and vegetation - as well as a nearby cavern holding a Branded-looking crystal.

Destroy the chaotic materials created by the reactor meltdown (15)

Mini-jumping puzzles
There are two short jumping puzzles associated with charging the Matrix Cube Key that is used to start the Defeat the misplaced steam ogre event.

Researcher: When the reactor blew, the world's fabric turned inside-out. Some things will never be the same.

Krewe Researcher: Things are feeling a little bit less chaotic. Maybe now Rooba can bring that golem in to clean up some of the magic energies.