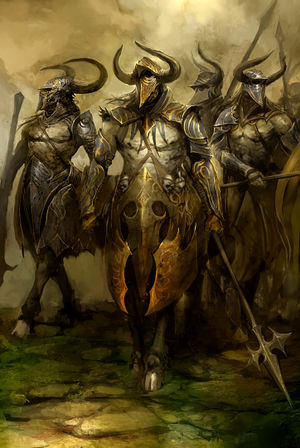 A group of heavily armoured centaurs.

Humans. They always think the world turns on their shoulders. The centaur people know secrets that you cannot fathom. Our warriors blaze through battle like fire on a dry plain. Your kind can enslave us, but never shall you break our spirits. We fear nothing beneath the open sky.

Centaurs are a four-legged race of warlike creatures whose features combine equine and human elements. The centaurs in Central Tyria are ruled by the dominant Modniir tribe. The centaur alliance is engaged in a full-scale war with the human nation of Kryta, ostensibly to reclaim territory stolen by humans in 300 AE when Kryta was first settled.

In days gone by, the centaurs were spread across Tyria, but with the unification of the tribes they are now mainly found in Kryta with suggestions that they stage their attacks from the Woodland Cascades. They were also a prominent race in Elona until Palawa Joko's rise to power. 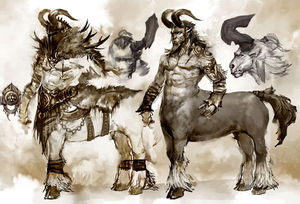 Centaurs have the head, arms, and torso of a human, but the body of a horse, although the nature of their biological relationship with either human or horses is unknown. They are often noted for their ferociousness in battle and speed. Different centaur tribes are considered more fitting for certain roles: for example, the Harathi centaurs are known as capable engineers, responsible for maintaining the siege weaponry of the Modniir-controlled alliance, but it is not known whether these differences in ability are genetic or cultural.

Centaurs can be very long-lived if allowed to age naturally. For example, the peace advocate Ventari, a centaur who was already considered an elder in 1072 AE, lived long enough to deeply influence sylvari philosophy, finally passing away in 1180 AE. He continues to exist as a spirit within the Dream of Dreams, attributing this to their beliefs of their "guiding spirit ancestors".

Elonian centaurs not only have equine features, but also resemble the swift gazelles that run across plains and savannas. These creatures are also more leonine than their distant Tyrian cousins, displaying some of the social behaviors of big cats—a group of Elonian centaurs is called a "pride." Their extended families normally prowl and hunt around a pride's breeding grounds, fighting to defend their territory.

One tribe from the Crystal Desert, known as the Orshad Raiders, were known to consume human flesh. It is not known if this practice was present in other tribes or was unique to this single group. 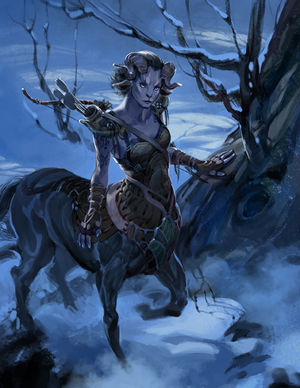 Centaur family bonds have correspondingly diminished in importance as the war against humanity progresses. They still have defined family roles: in short, the males hunt and protect the tribe's borders while the females aggressively defend centaur civilians while administering the day-to-day operation of encampments. Males are more common on the battlefield, but as the conflict with humanity continues to drain centaur resources, more and more females are being called away from centaur homesteads to participate in the front line fighting.[1]

The centaurs are generally a very spiritual people that combine nature worship with ancestor worship. This worship was always fairly militant and violent, with rites that routinely ended in ritualistic combat between centaur tribes or between individuals from the same tribe. Years of struggle and border warfare have hardened the centaurs to the point where their religious observances are even more violent and martial than they had been, especially with the Modniir's aggressive campaign of attacks on humanity.

Centaurs still have a deep reverence for their nature spirit, whom they vehemently deny is an aspect of the human goddess Melandru, but these days they focus on the proud, wild, and free aspects of their spirituality far more than the growing and nurturing aspects.[1]

In brighter times, Elonian prides gathered around massive "ancestor trees," where they believed the spirits of their forebears watched over them. According to arcane scholars, the fruit of these trees was seen as divine, possibly as a way to pass down spiritual wisdom from one generation to the next.

The centaurs have heard rumours of the emergence of the sylvari, but do not yet know what to make of them. Some, at least, believe the sylvari to be spirits of the land.[2]

In modern times, the bulk of centaur society in Central Tyria is structured more like a massive army under the control of a powerful warlord—specifically, War King Ulgoth the Mighty of the Modniir. In reaction to all the other sentient races pushing in on centaur territory with humanity being the first on their list of enemies, the Modniir mustered and organized the Harathi and Tamini tribes into a single large fighting force known as the centaur alliance.

The Modniir occupy the highest position in this tribal hierarchy, followed by the Harathi, and then the Tamini. The Modniir are ruthless and dictatorial, conscripting the less powerful centaur tribes into service and forcing them to fight according to the combat strategies and orders of battle laid out by the Modniir high command.[1] 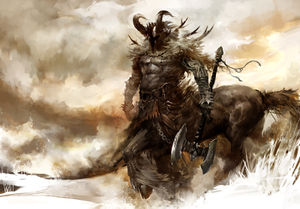 A centaur in the Shiverpeaks.
Section-stub. This key section of the article is incomplete. You can help the Guild Wars 2 Wiki by expanding it.
Reason: Missing discussion of recent developments in Central Tyria (centaurs being funded by Ministry Guard, Ulgoth's defeat, etc.)

In the past, the centaurs were spread throughout the world. They were first displaced by humans in around 300 AE when the human kingdom of Kryta grew, and humans began settling the slopes of the Shiverpeak Mountains, home of the Modniir. In 1072 AE, two centaur tribes, the Harathi and Modniir, convened in the then-Maguuma Jungle and attempted an alliance, but human intervention prevented it.

In 1075 AE, the Kournans decimated the Veldrunner by driving their prides westward, away from their territory, ancestry, and spirituality. General Bayel's pacification campaigns allowed the province of Kourna to recruit many of them as slave laborers. Exiled and refugee centaurs raided human villages to survive, and most developed a fierce hatred for humanity. In 1078 AE, the Modniir were wiped out by a band of Ebon Vanguard and norn, on the steps of the Eye of the North, sparking the current conflict.

Later, in 1165 AE, the Modniir were pushed further south by the rise of Jormag, where they were put into further conflict with the humans and norn, as the recently displaced races competed for territory.[3]. In 1219 AE, the Rising of Orr set fleeing humans against centaurs, and the Harathi of the Maguuma joined the battle. 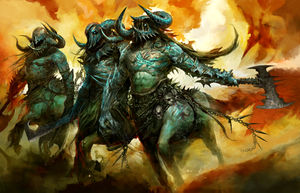 By 1325 AE, the Modniir-led centaur alliance had spent centuries waging war on humans to reclaim Kryta for themselves. The centaurs struck a deal with the Lionguard and were not openly hostile to them or anyone else paying a visit to their havens. However, some individuals sought a life away from centaur society and their vicious war. Centaurs who openly spoke against the war or War King Ulgoth, such as Outcast Qindova, were exiled. During this time the Order of Whispers reported that centaurs had been seen meeting with the Flame Legion, which raised concerns in the Order in case any tentative partnership between the Flame Legion and the centaur alliance came to pass.[4]

Not all centaurs in Tyria were part of the Modniir-led war, however. The Maguuma were a tribe of peaceful centaurs living in the Maguuma Wastes, who had splintered from the Harathi sometime in the past. This tribe is currently found in Dry Top, as the tribe in the Silverwastes was wiped out due to the actions of Caithe and Faolain in the past.[5]

Elona used to have centaur herds, up until at least the events of Nightfall. In the years since Palawa Joko's conquest of the region in 1175 AE, it is believed that the Losaru and Veldrunner tribes were eradicated due to Joko's intense hatred of the species. While their territory was in the far southern regions of Kourna, and travel south of Vabbi had been restricted due to Joko's edicts, there had been no signs of any centaurs in the Elonian region. However, the Bone Palace integrated centaur bones into its architecture.[6]

In 1333 AE, it was mentioned that the centaurs of Central Tyria were being driven out of their lands by Primordus's destroyers.[7]