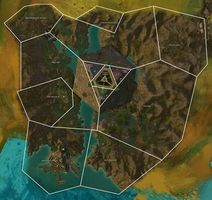 The greatest city of the Asura is a wonder of arcanic architecture. It is a great subdivided cube that floats over the surrounding terrain, impressing all the races with the might of its magic.

, pronounced rahta soom) is the capital city of the asura and is in the form of a giant, floating cube. When the Great Destroyer drove them from their homes in the Depths of Tyria 250 years ago, they arrived at the ruins of some previous civilization, setting up geomystical generators for power within these already fortified confines and establishing the area as their new capital. The aesthetic sensibilities of these ruins are reflected in modern asuran architecture.

Originally a hastily erected outpost protected by ruins, Rata Sum is now a geometrical masterpiece and testament to the asura's unstoppable ability to progress.