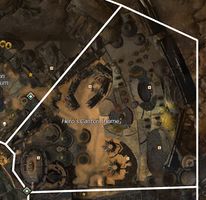 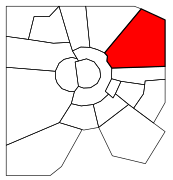 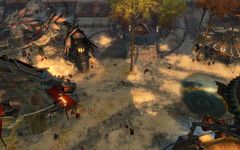 The Hero's Canton is the home instance for charr characters within the Black Citadel. It houses the barracks for warbands of all three High Legions, as well as the Citadel's fahrar.

From Black Citadel: The entrance is to the west from the

Mustering Ground Waypoint — - head towards the merchant tag on the main map. At the big gate an instance dialog will show.

Feline (after feeding the cats of the Hungry cat scavenger hunt)

Ogre (If the ogres have been helped)

Section-stub. This key section of the article is incomplete. You can help the Guild Wars 2 Wiki by expanding it.
Reason: Missing dialogue from NPCs around 12th Iron Maniple, possibly elsewhere too.

Soldier: If you cannot kill an animal, blind it or break a leg. Make it regret fighting you.

Soldier: When the heat of battle takes me, nothing can stop me until my muzzle is covered with gore.

Soldier: On my last skirmish, I picked up an ancient dwarven hammer. It's not battle-worthy, but it sure looks mighty!

Soldier: I'm going to make my grandsire as proud as Pyre Fierceshot was of Kalla Scorchrazor.

Citizen: Nothing like hunting deer in the morning sun.

Citizen: Never fight something with more arms and legs than you.

Citizen (1): Kalla Scorchrazor was a grandcub of Pyre Fierceshot.
Citizen (2): Yeah, he said we had no gods, and she forced the shamans from power.
Citizen (1): I'd give anything to fight like she did.

Soldier: You can find some good weapon parts at Junker's Scrapyard, if you've got a patience to dig through the piles.

Old Soldier: Never get emotional in a fight. It keeps you smarter than any wild animal you face.

Citizen: When I'm get some time off, I gonna come back here.

Adamant Guard: This weapon is getting too worn. I'll need to replace it.

Soldier (1): Our centurion doesn't know what he's doing.
Soldier (2): And you do? Don't flatter yourself.
Soldier (3): He's in charge for a reason. Pipe down and you might learn something from him.

Citizen: Hoelbrak's a fun place to visit. Last time, I got so drunk, I let a norn shave his name into my fur.

Citizen: Sylvari are mystery to me. They seem so innocent, but in battle, they handle themselves quite completely.

Citizen: Don't feed the wild animals. Unless it's a killing end of a weapon.

Soldier: Keep your claws sharp. They're the weapons you'll always have.

Old Soldier: That was the campaign where I got my favorite scar. Ah, I was a loose cannon in those days.

Soldier: Do you think that was overkill? Nah.

Adamant Guard: It's not worth the stress.

Soldier: A fine place for a vacation from my idiot underlings.

Old Soldier: It's been a long time since I had my muzzle down in blood and mud. I miss those days.

Soldier (1): What are you doing after your shift?
Soldier (2): Watching the fights. You get to see some great tactical maneuvers in the arena.

Adamant Guard: The Black Citadel is both a strategic victory and a technological marvel. The Iron Legion should be proud.

Cub: I want to see the Claw of the Khan-Ur up close. I heard it's wickedly sharp!

Cub: Smell that air. Look at the sky. This is the best land in all of Tyria.

Soldier: As if you could understand my duties. Don't strain yourself.

Soldier: My warband has seen more action than anyone else from my fahrar. Them more we fight, the less we want to come home.

Citizen: Look at that. You can find beauty here, and dozens of ways to die. I like that challenge.

Citizen: Magic can be a powerful tool, but no way I'd trust my life to it.

Citizen: I hate wild animals. Except the ones I can pick up and eat.

Blood Legion Centurion: The most important lesson I learned is that you never want to be the weakest link.

Blood Legion Soldier: There we were, huddled in the dark, when suddenly we hear drums echoing through the caverns. I can't talk about it yet.

Citizen: I say don't waste your time on her. Once a scrapper, always a scrapper.

Adamant Guard: The Vigil is an honorable organization. I'm seriously considering joining up.

Citizen (1): Take my advice. I had more cubs than you. In time, you'll learn.
Citizen (2): Experience is a great teacher, but in the meantime I'll stick with common sense.

Citizen (1): Sylvari don't look like much. Bunch of skinny, mewling kittens.
Citizen (2): Our cubs have to fight somebody. Let's see if those twigs can fight back.

Soldier: It's never a good day until I kill someone.

Citizen: The asura who operates that gate has nerves of steel. He stands out there every day, even knowing what's under his feet.

Soldier: I met one of Ash Legion tribunes. She looked like she could gut me just by looking at me.

Citizen: The Blood Legion is always quick to join in when Ash and Iron go at it.

Soldier: Stay way from the wild animals and they'll stay away from you.

Soldier: Hunt them down and slit their throats.

Soldier: I've yet to meet a bottle of whiskey I didn't like. Or drink dry.

Soldier: You been to Steeleye Span? Mm. Makes my chest swell with pride to see it stand in defiance against the dragon’s servants.

Cub: You mark my words, Rytlock Brimstone will be Imperator of Blood Legion one day.

Citizen: Keep you eyes open. It might be the difference between predator and pray.

Citizen: Ash Legion? I can't say I approve of their methods, but they're handy to have around sometimes.

Citizen: After that last defeat, he lost two ranks. They're moving him out of Praetor's Canton and back to barracks.

Citizen: Never turn your back on an enemy, a stranger, or an animal.

Citizen: Forget it! It's too big for you to understand.

Citizen: There's whiskey and then there's charr whiskey. I once saw a human try to drink charr whiskey, Ha! He never got his voice back!

Old Soldier: I may have lost a step or two, I'll admit. But I still have enough in me to take down a nest of grawl.

Old Soldier: I'll never forget the first time one of those war wagons rolled into camp. Right then and there, I knew I wanted to be Iron.

Blood Legion Soldier: Some of my old fahrar are buried near here. Lousy fighters, all of them.

Citizen: Those weak-willed fools in the Flame Legion are blinded by the lie of faith! We'll teach them the error of their ways.

Citizen: Sometimes, for fun, I head over to the Ghostblast Battery and watch 'em pound ghosts into quivering pools of ectoplasm.

NPC near 20th Blood Cohort point of interest:[verification requested] Did you hear the Heart warband is in town? They're passing through, on their way to Diessa Plateau.

NPC near 20th Blood Cohort point of interest:[verification requested] My warband's about to ship out. We're being sent to the Blazeridge Steppes to help some Sentinels get back to the Brand.

(The cubs run to 20th Blood Cohort)
Bevin Acidspit: That one was too easy, Ari! I mean "Legionnaire." Ask me another.
Ari Plaguespit: Okay. So who is my favorite tribune and what legion is he?
Bevin Acidspit: I know! Rytlock Brimstone! He's Blood Legion, and he's from Destiny's Edge, and he's got the mightiest sword!
Ari Plaguespit: (laugh) Good answer. Let's go see what's happening at the Ash checkpoint.

(The cubs run to the platform leading to Hero's Forum)
Ari Plaguespit: Bev, who are the most respected Iron Legion tribunes?
Bevin Acidspit: Fume Brighteye, Bhuer Goreblade, and Mia Kindleshot! They're mighty!
Ari Plaguespit: Good. You're going to make your warband proud by killing your test.