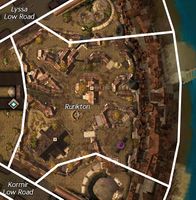 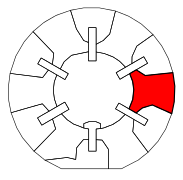 Rurikton is a district within Divinity's Reach located in the east. It is the Ascalonian district and is where most of those with Ascalonian descent live as well as refugees from Ebonhawke. This district also has an asura gate which leads to Ebonhawke and Rurikton acts as the main support for the fortress. The asura gate used to be tuned periodically to places outside of Ebonhawke, such as Lion's Arch, but due to the construction of a second gate in the Upper City, it is now permanently tuned to Ebonhawke.

The residents pride both their ancestry, especially their hero ancestors, as well as having immense pride for Ascalon. Rurikton is named after one such Ascalonian hero, Prince Rurik, who gave his life to lead his people over the Shiverpeak Mountains to escape the Charr Invasion.

Assistant: Have you ever stopped a golem with logic alone? I have.

Assistant: I love it when an asynchronous logic algorithm comes together.

Assistant: If we increase the sympathetic resonance, perhaps the power output can be boosted.

Child: I miss my mom and dad.

Child: When I grow up, I'm going to be a brave hero!

Child: Those guards ask a lot of questions. I didn't expect a Seraph Inquisition.

Citizen: Hey! Grope me again and I'll cut off your thumbs.

Citizen: If the charr think they can come here, me and my meat cleaver will tell them otherwise.

Citizen: Met a sylvari the other day. Curious lot, they are.

Citizen (1): Any news from Ebonhawke?
Citizen (2): Just the usual. Ministry won't send troops, but we're trying to send food.
Citizen (1): I'm sick of this. You know, if we had Ebonhawke as a strong ally, we'd have those centaurs surrounded. We'd crush them.
Citizen (2): Ebonhawke has its own problems.

Citizen (1): Asura get on my nerves. I'm sick of their condescending nonsense.
Citizen (2): We could use more of those asura gates, though. Think of the supplies we could move in here.
Citizen (1): You have any idea how much it costs to ship something by asura gate? Maybe Ebonhawke is willing to pay those prices, but I'm not! All I get from those flop-eared rats is attitude!
Citizen (2): Hey, I'm not the one who lost at Polymock. Get over it!

Citizen: Officer! Could I talk to you for a moment?
Seraph Soldier: Is there a problem?
Citizen: Come inside. I'll tell you all about it.

Citizen: Ran into an asura. Called me a bookah. I think she was hitting on me.
Seraph Soldier: It's nothing. Don't worry about it.

Seraph Soldier: If you've got a shield, don't be afraid to drive it into a creature's skull.

Scholar (1): Find anything good?
Scholar (2): Yes! I found some rather remarkable scrolls about a group of adventurers some centuries ago.
Scholar (2): They escaped Ascalon right before the Searing, crossed the Kingdom of Kryta, joined and betrayed the White Mantle, and even faced a lich lord!
Scholar (1): Wow. Maybe someday, we'll meet heroes like that.

Valdi the Lush: Show me a woman who can wrestle a bear, and I'll show you a keeper!
Seraph Soldier: (giggle)