This article is about the area accessible all year round. For the zone accessible during Festival of the Four Winds, see The Crown Pavilion (zone). 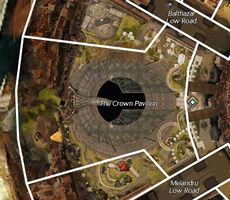 Map of The Crown Pavilion 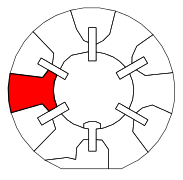 The Crown Pavilion within Divinity's Reach proper is the upper level of the Crown Pavilion arena that is located within the huge sinkhole that was once known as the Great Collapse. The Crown Pavilion is a large arena built to commemorate humanity's resilience despite their hardships, and the renovation of the district was the Queen's Jubilee that marked Queen Jennah's 10th year as queen of Kryta. The plans for these renovations were in place for a few years.[1]

There are portals to access the middle levels of the Crown Pavilion (which are within the area, not the zone).

The Canthan and Arts District in Divinity's Reach was established since the founding of the city in 1220 AE and had several Canthan immigrants moving in after access to Cantha had been cut off by the rising of Orr and the spreading influence of the Elder Dragon Zhaitan. As it grew, the district had theatres, craftsmen, and entertainment, including the Great Symphony Hall. It collapsed sometime between 1324 and early 1325 AE due to a rushed construction and being placed atop a cavernous sinkhole which local Krytans had used as tombs in the past.[2][3][4][5][6][7] Some of the residents who had escaped the collapse migrated to neighboring districts.

There are conflicting stories on what happened the night of the collapse. According to the Shining Blade the sewer system had collapsed and there had been warning signs a couple weeks before the disaster. Accordingly, they took steps to work with the Seraph to evacuate all residents from the district. Some citizens reported the collapse happening in multiple stages with cracks appearing first, and a main collapse happening later. However, many locals never mentioned that the Seraph were involved with protecting the citizens, and along with this, Riot Alice said that her father had died during the collapse. There were also rumors of strange noises coming from the depths of the Great Collapse, which were associated with pre-existing rumors of stories of drakes living in the city's sewer system.[2]

In 1326 AE, the district was rebuilt as the Crown Pavilion, an arena for duels and mass brawls which both commemorated humanity's resilience and celebrated Queen Jennah's tenth year as the monarch of Kryta. The festivities were interrupted by two surprise attacks led by the sylvari terrorist Scarlet Briar who set off several bombs which claimed many lives, activated tampered watchknights to attack surviving citizens and soldiers, and attempted to kidnap the queen.[8][9] Although Scarlet was ultimately driven off, the aftermath of the attack led to the watchknights being pulled back until they were reprogrammed and reinstated for the Siege of Divinity's Reach in 1330 AE with an official public return to the Crown Pavilion for the Festival of the Four Winds in 1331 AE.[10]

Child: When I grow up, I'm going to be a brave hero!

Child: Is that your face? (boy with a sword)

Child: Are you a stranger? (boy with a sword)

During The Great Collapse
Gossiping Citizen (male): Did you ever stop to wonder if something caused that collapse intentionally? Scary thought.

Gossiping Citizen (female): I was strolling along the promenade when the main collapse happened. It made quite a ruckus!