Crisis at the Aerie 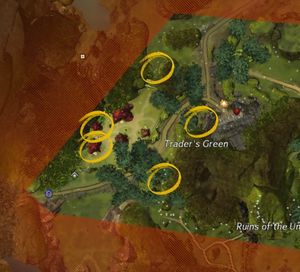 1 If supported by the Exalted

Upon entering the instance
Canach: Ah, Commander—good timing. Just got here myself.
<Character name>: If feels like it's been years, Canach. It's great to see you again. I just wish it was under better circumstances.
Canach: Lucky for you, my bar for "better circumstances" isn't what it used to be.
<Character name>: With all these icebrood around, we need to get the survivors into Caledon Haven. Should be safe there.
Canach: Except it looks like the Lionguard were just as surprised as the sylvari.
Canach: You know, the Dominion of Winds is right up the hill. Would be nice if overgrown feather dusters pitched in for once.

When icebrood start destroying the barricades
One of the following:

Speaking with Kalidris
Kalidris Sparrowhawk: The icebrood are attacking the Aerie! We need to send reinforcements from the trading post. Will you accompany me?

While traveling
Canach: So when your neighbors get attacked, nothing. But when YOU'RE attacked, you expect us to pitch in, no questions asked?
Kalidris Sparrowhawk: If you have questions, I would be more than happy to answer them.
Canach: A masterful dodge. Who else have you managed to pull into this?
One of the following:

Canach: I'll bet they heard Jory's broadcast, showed up to help, then got dragooned into this mess.

Arriving at Hanto Trading Post
Kalidris Sparrowhawk: The gates are just up this path. I'll give you a moment to plan.

Speaking with Kalidris
Kalidris Sparrowhawk: All right. We'll need to be careful; the woods are crawling with icebrood. Are you ready?

I am not ready.

Starting escort event at Hanto Trading Post
One of the following:

Canach: You seemed surprised that we would help you, Kalidris. Quite the dim view you must have of your neighbors.
Kalidris Sparrowhawk: I don't really know my neighbors. This is only my third time outside the walls. Never even met a sylvari before.
Canach: Lucky for you, I've been told I make a wonderful first impression.
Kalidris Sparrowhawk: Are all sylvari like you?
Canach: My dear, I dare say none of them are quite like me. Most of them share in your naivete.
Canach: But me? Well, my face is basically a map of the world by now.

Kalidris Sparrowhawk: There's the ice wall up ahead! Are you with me?
<Character name>: We're with you! Let's tear it down.
Canach: Looks like we're making progress, Commander!
Kalidris Sparrowhawk: We're getting close! Just a few more good hits and we'll smash that wall to shards!

Arriving near the Dominion
Hayato: Kalidris? You led the counterattack?
Kalidris Sparrowhawk: With more than a little help. These outsiders pitched in, and of course the others beyond the bridge.
Hayato: You assembled this army in—what, an hour? How did you convince them?
<Character name>: You asked for help, so we gave it. That's always reason enough. We want to extend—
Kalidris Sparrowhawk: Behind you! Beyond the bridge!
Canach: Well, that's going to be a problem. Want to open that gate so we can not die?
Hayato: And risk that thing getting inside? Not a chance.
Kalidris Sparrowhawk: Then what do we do? We're trapped!
<Character name>: Those bonfires! You can light your arrows and melt the damn thing!
Hayato: That'll work! Come on!

During the boss fight
Kalidris Sparrowhawk: It froze the bonfires! Fall back!

Hayato: It's gaining ground! We have to slow it down!
Kalidris Sparrowhawk: There's so many of them. I'm going to die here.
Canach: Oh, you're not going to die here. This is just another fun story you get to tell your friends at the tavern.
Kalidris Sparrowhawk: I don't have any friends.
Canach: Just another fun story you get to—keep to yourself, I suppose.
Canach: We're running out of convenient fire, Commander.

After defeating the Frost Colossus
Hayato: I don't believe it. We survived. I don't know what to say.
Canach: We can start at "thank you" and navigate from there?
Kalidris Sparrowhawk: I have to be honest, I didn't expect I'd find help from anyone outside our walls. Not after what I'd been told.
Kalidris Sparrowhawk: There is much to think on. But I can safely say you're not at all like I expected. So... Thank you.
<Character name>: The Dominion of Winds faces the same threat we all do. Perhaps there is hope of a stronger alliance between us.
Kalidris Sparrowhawk: I have little sway over my people. But perhaps if I tell this story to enough tengu in the tavern...
If sylvari:

<Character name>: Opinions will change. Any who wish to fight with us need only say the word. Farewell, Kalidris Sparrowhawk.

If norn:
<Character name>: Opinions will change. Anyone who wants to fight with us just has to say the word. Good-bye, Kalidris Sparrowhawk.

Optionally talking to Canach
Canach: Well, that was a bit of an adventure, now, wasn't it?

You think it could help bring more tengu into the fight?

Canach: More, sure. Enough? Not likely. Kalidris was able to fight with us, side by side. Not everyone's that lucky.
Canach: Or unlucky. Not even sure anymore. Like I said, my bar for what constitutes a good time isn't what it used to be.

What were you really doing in Caledon Forest?

Canach: Just a brief stopover on my own journey, Commander. One I'll have to be returning to.
Canach: I made a lot of money off of your adventures. Allowed me to put some of my own plans in motion.
Canach: Now I have promises to keep, and schemes to complete.
Canach: Things that require me to stay alive, and far away from world-ending events.
Canach: But don't worry, Commander. I'll always bet on you.

Where did you go after Dragonfall?

Canach: Traveling with Sayida.
Canach: I had to go collect my winnings from every major city across Elona and Tyria.
Canach: Imagine their surprise when I showed up with the news that Kralkatorrik was dead. Relief! Joy! "Uh-oh!"
Canach: It's good I had a little muscle to back up my claims.

It's good to see you a gain, Canach.

All in a day's work.

What do you do in the Dominion of the Winds?

What are tengu told about the outside world?

Thank you again for your help.

Kalidris Sparrowhawk: You helped me. I'll not soon forget that. And I'll make sure the tengu don't, either. Farewell, Commander.

Bug:
Tengu Allies can sometimes be confused. Standing still for a long time or even runing outside the instance border just to flank the enemies on the bridge
Dragon Response Missions