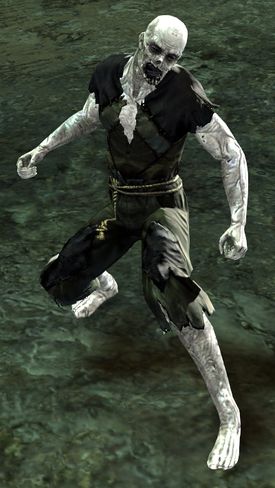 The Risen are the undead minions of the Elder Dragon Zhaitan. They consist mostly of the humans of Orr and corsairs, but have many of the species of Tyria within their ranks as well. In the height of Zhaitan's reign, the Risen had spread from the Ring of Fire islands to the northern Elonian border in the Crystal Desert, to the east and west shores of the Sea of Sorrows, and even the northern shores of Cantha

Most of the Risen army are nigh-mindless berserkers, possessing only a fraction of the Elder Dragon's willpower. They are often directed by more powerful creatures, such as the many dragon champions of Zhaitan, who act with much more self-will, determination and strategy. Aside from (and sometimes including) Zhaitan's champions, there are specialized Risen, ranging from undercover scouts to abomination-constructing Risen Surgeons. As Zhaitan plundered the Ruins of Orr when it woke, its most powerful servants are the former kings and sorcerers of Orr, as well as the high priests and priestesses of the Six Human Gods. Zhaitan's ranks also include colossal undead species such as the unknown type of undead dragons of which the best known are Blightghast the Plaguebringer and Tequatl the Sunless, and even a reanimated corpse of a Great Giant, but their origins are not explained.

Those who die fighting Risen are almost always transformed instantaneously, with their appearance immediately changed into rotting flesh and gray skin as they seek death upon their former allies. The Risen also bring in bodies found, which need to be saturated in Zhaitan's corrupting energies.

For the first twenty-some years after the Rising of Orr, the Risen forces had remained an enigma to Tyrians, only existing as rumors of Dead Ships in the southern Sea of Sorrows. Their presence had first been confirmed in 1229 AE when a Risen armada had attacked and butchered Port Stalwart. Despite the realization of their existence, many believed the Risen to not be a true threat with the exception of Cobiah Marriner and Lion's Arch. Risen forces continued to be an uncommon event in the Sea of Sorrows, only marking three major invasions since—one in 1256 AE on Lion's Arch, one on Port Noble which got wiped out, and the latest being in 1325 AE again on Lion's Arch.

Along with these naval invasions and patrols, Risen forces had been invading along the eastern coast of the Sea of Sorrows, along Bloodtide Coast, and in recent years, the Tarnished Coast as well. Since Claw Island's construction, only few pockets of Risen managed to reach the northern shores of the Sea of Sorrows, having to fight between Claw Island and the walls of the Dominion of Winds.

In 1325 AE, the Risen began appearing in Central Tyria in greater numbers. A group of Risen led by the corrupted Kellach made an attempt on Queen Jennah's life in Divinity's Reach while the Risen lich Mazdak the Accursed targeted several outposts in Krytan territory, and Necromancer Rissa raised Risen to assault various locations in Ascalon. All of these separate Risen forces were defeated but they were simply the vanguard of the true devastation to come.

After one of Zhaitan's champions, Blightghast the Plaguebringer, began the second Risen invasion on Lion's Arch and caused the fall of Claw Island, the Orders united to form the Pact and liberated Claw Island. Following their victory over Blightghast, the Pact began an invasion of Orr, leading to the eventual fall of Zhaitan after crippling the Elder Dragon's magic supply, killing its specialized minions, and purifying the Artesian Waters to weaken it.

Since Zhaitan's demise, the Risen numbers were reported to have dwindled, leaving the Sea of Sorrows' islands such as Southsun Cove free of Risen. Since then, the Risen forces became hunched over, and those closest to Orr became larger. In 1326 AE, Tequatl the Sunless became stronger due to absorbing some of the fallen Zhaitan's power, and continued to lead Risen forces against nearby inhabitants until it was slain by the Pact assisted by adventurers.[1]

Even in 1330 AE, Risen still remained a threat. Noticeable changes had been observed in them over the years, such as some not being outright hostile to all non-Risen. While the Pact continued to fight the dwindling Risen forces across Orr, in certain places groups of adventurers and scholars had been working on Orrian reclamation efforts, led by Dagonet. These individuals took to calling them "Unchained", in reference to their lack of an enslaving master, and had discovered that ley-line magic was effective in destroying Risen, and even performed experiments to remove the dragon corruption without killing their hosts. Stronger varieties of Risen, such as the Unchained Kingpins, could bestow limited intelligence and command their fellow Unchained against the living.