This article is about the zone. For the achievement category, see The Echovald Wilds (achievements). 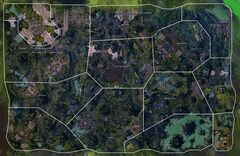 Map of The Echovald Wilds

When Shiro the Betrayer was slain his death cry swept across Cantha in the form of the Jade Wind. It petrified what it touched, and Echovald became a forest of stone. Hundreds of years later the Echovald Wilds are full of life—but the ancient Kurzick ruins still stand, slowly claimed by nature.

The Echovald Wilds are a part of the largest forest of Cantha, the Echovald Forest. Was the home of the Kurzicks, now there are only ruins of their former home. The forest suffered when the Jade Wind was unleashed petrifying the entire place, over the years the forest has come back to life and now the wildlife thrives.

Now the Echovald Wilds belong to the Empire of the Dragon and within the wilds lies a large Xunlai Jade Junkyard, and is also home to the Angchu tengu, who live in Mori Village. The territory is in conflict between the Speakers, the Jade Brotherhood and the Kestrels.